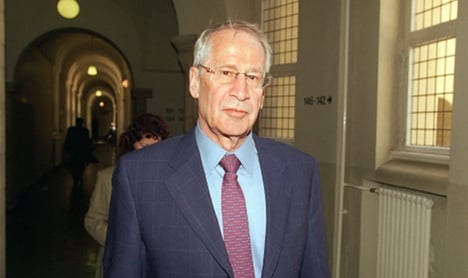 A state court in Berlin ruled that she was not entitled to payments for former “fighters against fascism” in the Nazi period because of Wolf’s later involvement in spying on youths in communist East Germany.

Dubbed “The Man Without a Face” because Western intelligence services long lacked even a photograph of him, Wolf directed one of the world’s most formidable espionage networks for nearly three decades.

He died in 2006 at the age of 83 but his widow Andrea refused to accept that he had been stripped of his “honorary pension” three years earlier.

In the treaty sealing German reunification in 1990, former resistance fighters against the Nazis were granted the right to an East German pension as well as their standard state retirement stipend.

Wolf was included on the list of beneficiaries until 2003, when federal authorities won an appeal to deny him the payments. The former spy fought in vain against the ruling until 2005.

The court said Monday that with his work for East Germany’s dreaded Stasi secret police, Wolf “violated the basic principles of humanity and the rule of law”.

In particular, the judges cited the targeting of politically suspect young East Germans for intensive observation as a practice that disqualified him for the so called heroes’ pension.

A legend in his own lifetime, Wolf successfully ran more than 4,000 spies across the Iron Curtain during his tenure at the Stasi’s foreign intelligence division from 1958 to 1987, infiltrating countless “moles” deep into the West German government administration.

One of them, Günter Guillaume, caused the downfall of West German Chancellor Willy Brandt in 1974.