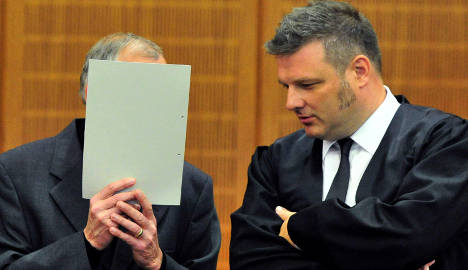 One of the accused with his lawyer. Photo: DPA

In one of Germany’s biggest fraud cases the defendants, aged 27 to 65, from Germany, Britain and France, are suspected of cooking up an international system to cheat tax authorities out of more than €230 million euros ($329 million).

“The defendants are accused of involvement in a web of tax fraud,” presiding judge Martin Bach said.

The alleged racket targeted the European Union Emission Trading Scheme, the largest multi-national, greenhouse gas emissions trading scheme in the world, with about 12,000 companies on the exchange.

Limits are placed on the amount of carbon dioxide companies may emit, while those which pollute less are free to sell their rights to companies unable to limit their emissions.

Prosecutors in the German business capital Frankfurt say the accused regularly drew tax rebates on emissions certificates for which no taxes had been paid in the first place.

The defendants could face a reduced sentence of between three and nine years in prison if they confess. Otherwise they face up to 10 years’ jail if convicted, Bach said.

Authorities have launched a probe against another 160 suspects in the case, including alleged accomplices in the United Arab Emirates, Britain and Switzerland.

The trial, in which more than 300 witnesses are due to testify, is expected to run until March 2012.