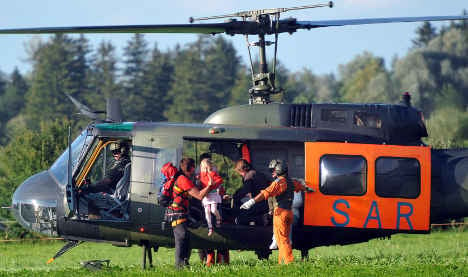 The paraglider had hit the wires on the Tegelberg near Schwangau in Bavaria on Friday afternoon, becoming entangled and preventing further use of the cable cars.

A spokesman for the police said the pilot, a German who lived in Switzerland, had been allowed to leave the country after the accident, despite the fact he is being investigated for potential charges of causing bodily harm by negligence, and dangerous interference in transport.

Karl Slezak from the German Paragliding and Hanggliding Federation (DHV) said he thought the pilot had probably made a mistake and not realized that he had to stay 50 metres above cables in order to avoid a dangerous situation.

The paraglider was being used to film footage for the state television station Bayerische Rundfunk, it was confirmed over the weekend – the 54-year-old pilot had a television reporter with him.

The 20 trapped people were rescued from their precarious situation by a helicopter team after having spent an uncomfortable night in the gondola, although food, drink and blankets had been taken to them on Friday evening via a vehicle which was able to still run along the cables.

Mountain rescue spokesman Roland Ampenberger said the group, which included a number of children, had been tense but very calm.

They were rescued by helicopter on Saturday in a spectacular mission. A check conducted on Sunday established that no damage was done to the wires and the cable car was expected to run again on Monday.

Video of the rescue via Financial Times Deutschland: