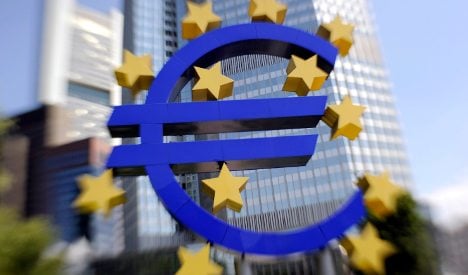 The idea of eurobonds issued and guaranteed by countries with better credit ratings has long been floated as a way of helping debt-saddled Greece and other struggling eurozone members.

Germany is opposed to the introduction of eurobonds as it believes they would increase its own borrowing costs and hold back ailing countries from implementing much-needed reforms.

While Chancellor Angela Merkel is due to meet French President Nicolas Sarkozy on Tuesday, Merkel’s spokesman Steffen Seibert told a regular news conference on Monday that the two leaders would not discuss eurobonds.

“The German government does not consider it worthwhile talking about eurobonds at the present time,” he said, adding that Germany does not believe this is “the right way” to go to help solve the eurozone crisis.

He said such measures would remove the pressure on indebted states to get savings programmes in place.

“There is no change: There will be no communitisation of debts, and no unlimited assistance,” he told Der Spiegel magazine.

“I rule out eurobonds so long as the member states run their own finance policies and we need the different interest rates so that there are incentives and potential sanctions in order to create financial policy solidarity.”

He said he was optimistic that the euro would survive the crisis, but that those currency partners which were struggling would not be rescued at any price.

This was supported by Economics Minister Philipp Rösler of the Free Democratic Party who told the Handelsblatt on Monday that eurobonds would mean higher interest rates and thus increase the burden on taxpayers.

But the Welt am Sonntag newspaper reported that the idea was no longer being completely ruled out within government circles.

Citing unnamed sources, the paper said that eurobonds and a more strongly centralised finance and economic policy were being considered as a last-ditch tactic, in the event that the current crisis threatened to lead to the break-up of the currency union.

Leader of the eurozone finance ministers Jean-Claude Juncker and Currency Commissioner Olli Rehn have spoken out in favour of the idea of eurobonds, while Italian Finance Minister Giulio Tremonti said on Saturday, “We would not be where we are now if we had had eurobonds,” according to the Süddeutsche Zeitung on Sunday.

Germany’s main opposition parties have also suggested eurobonds be introduced with Social Democratic Party leader Sigmar Gabriel it should be a matter of urgency.

“We urgently need a communal guarantee of bonds – that is the translation of eurobonds – at least for part of the debt which is possible for every European member state according to the Maastricht treaty, for 50 to 60 percent” he told ARD public television.

He said the fact that the Central European Bank was buying bonds, was an emergency measure because the European heads of state had not been able to impose their authority to be able to buy them up themselves.

But he said there should be a difference in interest paid by different countries such as Germany or Greece. States which want to issue the eurobonds would have to give up part of their budgetary sovereignty in order to do so, he added.

His suggestion was backed by the Green party whose leader Cem Özdemir told the Rheinische Post paper Eurobonds would certainly be cheaper than gigantic rescue funds. He suggested that the increase in interest rates on bonds could be countered if, “eurobonds were only allowed to cover up to 60 percent of gross domestic product.”

Merkel and Sarkozy meet on Tuesday in Paris to discuss the eurozone crisis.