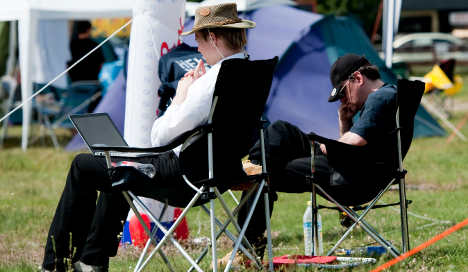 But instead of hippies it was computer hackers who had flooded this year’s summer camp. And rather than flower power, the talk was of the latest controversies in cyberspace, especially the legality of hacking and the role of famed whistleblower site WikiLeaks.

Julian Assange’s controversial agenda was a hot topic, following the release of hacked US diplomatic cables this year which again divided opinion on the whistleblower site and its founder.

Former WikiLeaks spokesman Daniel Domscheit-Berg, now a self-sworn enemy of Assange, used the Finowfurt event to announce the launch of his own platform, OpenLeaks, and challenged CCC members to hack it.

“He wants to use us as a credibility voucher,” said the CCC’s Andy Mueller-Maguhn, a close friend of Assange who stands out from the hacking crowd with his pressed shirt and briefcase.

“It’s very annoying. By definition, our movement is an open one,” he said, “but sometimes one has to set limits.”

Domscheit-Berg was thrown out of the club as a result of what was seen as an exploitation of the CCC name.

Organised by the CCC, which fights for freedom of information through hacking, the camp takes place every four years and is a venue for computer fans to meet, debate hacking issues and try out new technology.

Hosted over four days last week at a former Soviet base in Finowfurt, north of Berlin, the camp attracted an estimated 3,500 hackers from 50 countries, an increase from 2,300 people in 2007, CCC spokesman Frank Rieger said.

Mixing conferences with workshops with titles such as “Cyberpeace and datalove”, the camp attracted a young and mostly male crowd, united by the CCC slogan “Protect private data, exploit public data”.

But beyond the “peace and love” atmosphere, the hacking community was split on several issues.

“Hackers are very individualistic, they don’t like being put in boxes,” explained Rieger.

Apart from Wikileaks, another issue up for debate was the legality of hacking, where many agree the lines are blurred.

Samuel Lesueur of the French hacker group Ecolab said he has always chosen “the legal route” but admits that “out of the boundaries of the association, everyone does as they please”.

“Anything that’s illegal has no legitimacy to me,” said Jeremie Zimmermann, from “La Quadrature du Net”, a French group promoting Internet freedom.

But Zimmermann admited to campaigning against laws in France that ban downloading data from the Internet and downplayed spectacular hacking attacks by the groups Anonymous and LulzSec.

LulzSec claimed responsibility for a 50-day rampage earlier this year against international businesses and government agencies, including the Central Intelligence Agency (CIA), the US Senate and electronics giant Sony.

The group has since disbanded.

Last week another hacker group attacked the websites of numerous US police agencies in protest at the arrest of a number of their peers, including hackers from the group Anonymous.

But it was not all philosophical debate at Finowfurt.

“I want to hack my girlfriend’s webcam in order to spy on her,” confessed one young man, who did not want to give his name.

“But I couldn’t find anyone to tell me how to do it,” he added, looking dejected.