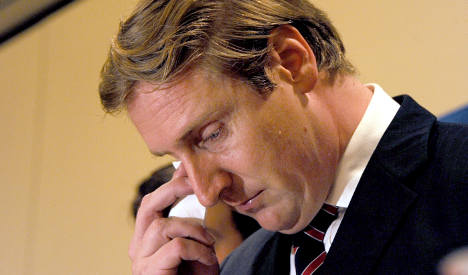 Christian von Boetticher, 40, who was set to lead Chancellor Angela Merkel’s party in its fight to retain power the north German state next May, stood down from that position on Sunday night after a more than two-and-a-half hour meeting with his state party leadership.

“Yes it is true, I fell in love with a young woman in the spring of 2010, and was with her for several months,” he told a press conference.

“It was quite simply, love,” he said, in tears, admitting that at the time the girl was just 16 years old.

“I would like to apologise with all my heart to all those people who I have disappointed and who placed great hope in me.”

He said that at the time he was seeing the teenager, he was not in a relationship with anyone else and that although it was what he called an, “unusual love,” it had been accepted by people around him.

It was not a private mistake, but clearly a political one, he said, that he had not understood at the time what such a relationship would mean to his candidacy in the next state election campaign.

Now he was stepping down to prevent his party from political damage, “but in particular to protect beloved people in my private and intimate life,” he said.

Several regional media reported over the weekend that Boetticher and the girl, who is from North-Rhine Westphalia, had met over Facebook and swapped numerous emails before meeting in March 2010. When he was made top election campaign candidate in May, Boetticher had finished the relationship.

Since he took over the chairmanship of the state party last September, he said he had repeatedly been confronted with speculation over his private life.

“There were several journalists who appeared to be certain that I was gay and were expecting an ‘outing’,” he said.

The regional CDU chapter has planned a meeting on Tuesday to decide what to do next. Although the relationship was legal, said the state party chairwoman Angelika Volquartz, Boetticher had made clear that he had wrongly estimated the moral components to it.

Boetticher is expected to remain state parliamentary leader of the party, but it will now have to scramble to reconfigure its campaign effort for the election next May.