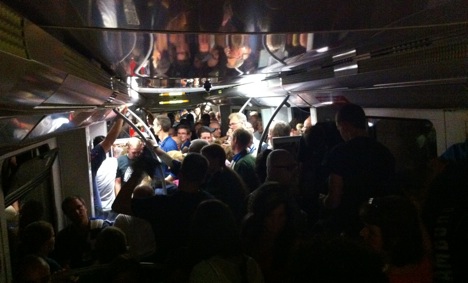 A fight between football fans at around 6:30pm at the Königsstraße station forced transport authorities to halt all trains on the line, leaving one stuck in a tunnel.

“The train operators reported that some people were walking along the tunnel,” the police spokesman said.

“In that event it is standard procedure to shut off the power.” That caused the light and air-conditioning to be shut down on the train.

Police then searched the tunnel, but found no-one. By the time they arrived at the train, one of the windows had already been smashed. Passengers had to wait several more minutes before they could leave the train, as the tracks had to be earthed to prevent any other dangers.

The passengers were finally escorted to the next station on foot. By 7:20pm everyone was in safety, and normal service was resumed shortly afterwards.

Apart from two women treated for breathlessness, there were no other injuries – even from the football fans’ fight that caused the initial emergency call. “They were no longer the priority for us,” the spokesman said.