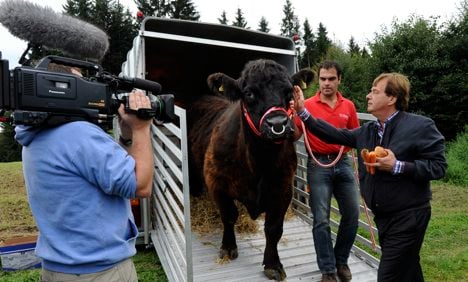 The animal protection initiative based in Gut Aiderbichl has turned to desperate measures to try to get Yvonne to come to them before hunters who have been given the green light to shoot her, do so.

The cow became something of a local cause after she fought her way through an electrified fence and escaped into the woods.

She had just been delivered from Austria to her new owner in Aschau, Bavaria on May 24, when she escaped and it seemed she would never be seen again..

But Yvonne made an error which could yet prove fatal: she ran onto a road and was nearly hit by a police car.

After that, authorities decreed that she must be killed for safety reasons, according to the Express newspaper. Two hunters were sent to roam the forests to track her down, but have so far been unsuccessful.

The people from Gut Aiderbichl enlisted Ernst to help late last week, and dismissed claims made in a local newspaper that he was castrated and thus would be of no use in seducing Yvonne.

They said he would still be attractive to the cow as he still had the relevant hormones and body odour.

Yet just days later they were preparing to deploy another bovine aide – Friesi, Yvonne’s son.

“A cow always reacts to her own child, with which she spent two summers,” said Gut Aiderbichl’s Michael Aufhauser on Friday.

He said he had discovered that Friesi had been sold to a farm where he was to be fattened up and slaughtered, but was still alive. He bought the two-year-old bull and brought him to his animal sanctuary where he will stay for a week before being brought to the Bavarian woods to try to tempt his mother out of exile.

Yvonne has so far remained disciplined enough to only make occasional, evening forays out of the forest to graze, leading some to dub her “the cow who wants to be a deer.”

It remains unclear whether Yvonne was intended for slaughter. The farmer who brought her from Austria denies this, but she no longer produces milk, so would have had little commercial value other than for meat.

Gut Aiderbichl has now bought her from its owner for €700, and intends to bring her to a farm where she would be able to live out her days in peace.