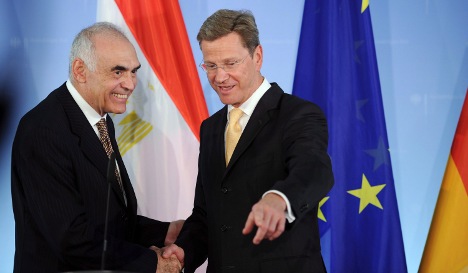 The outstanding loans will be swapped and used over the next four years to finance projects “subject to government consultations,” and come in addition to €150 million pledged by Germany for Egypt for the period 2011-2013.

Visiting Egyptian Foreign Minister Mohammed Amr, on his first trip to Europe since taking office last month, said that the assistance would lend the country a vital hand as it pursues democratic reforms.

He said Cairo needed assistance so the transformation would “also bear fruit for the Egyptian people.”

“The Egyptian economy must have a future if the democratic transition is to take hold in the long run,” he said, in remarks translated into German by an interpreter.

The Egyptian economy, which depends in large part on tourism, has seen a dramatic drop in arrivals and near zero economic growth during and after the revolt that ousted former president Hosni Mubarak in February.

Egypt, which estimates it needs between 10 and 12 billion dollars in international funding to keep it going until mid-2012, had courted loans worth roughly $6 billion from the International Monetary Fund and the World Bank.

But it withdrew the request in June in the name of greater economic independence.