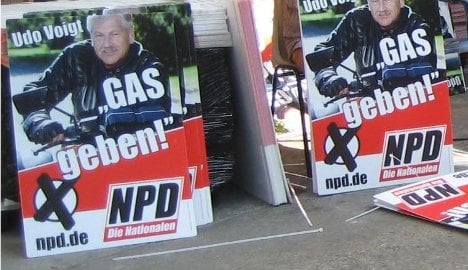 While the expression can be used to mean “get moving” it could also literally be translated as “give gas.”

Political opponents of the far-right NPD are interpreting the 22,000 posters distributed across the German capital as a veiled way of referring to the gassing of Jews in the Holocaust. Berlin holds its state election on September 18.

Andreas Gram, a member of the Berlin House of Representatives with the centre-right Christian Democratic Union (CDU) told the website of Der Spiegel that the NPD posters were “inhumane” and said they were obviously a play on the gas chambers.

Volker Ratzmann, the Greens’ parliamentary leader in Berlin, told Der Spiegel that they were a “deliberate provocation.”

But Voigt himself told the magazine that the allegations were baseless.

“I’m a passionate motorcyclist and want to accelerate into the House of Representatives,” he told Der Spiegel. “After 66 years you have to stop bringing things up from the past.”

He said he had shown the poster to 43 people and had gotten a negative reaction from one.

The NPD seems to actively seek to provoke its opponents. In a past election it put up posters showing immigrants flying away on a magic carpet while wishing them a “good flight home.”

One of its most recent controversies was a promotional brochure with a crossword puzzle. For a question seeking a German name “which is somewhat out of fashion,” the answer was “Adolf.”

Although the NPD strives to make waves, it has had trouble gaining a foothold nationally. It has seats in two state parliaments and none in the Bundestag.

It is not the only campaign misstep by the far-right in Berlin. Two campaign workers for the xenophobic Pro Deutschland party threatened and harassed a Lebanese man in the district of Steglitz on Wednesday, then attacked a plain-clothes policeman who tried to intervene.

The campaign workers, aged 42 and 50, were hanging campaign posters showing a mosque with a red line through it and a slogan urging people to support the ideas of Thilo Sarrazin, the former central banker and Berlin finance minister who has notoriously claimed Muslim immigrants are making Germany dumber.

A 32-year-old Lebanese man remonstrated with them over the message and their motives. The 42-year-old campaign worker then grabbed a hammer and threatened to “beat to death” the Lebanese man, police say.

A plain-clothes policeman who saw the confrontation from his car called for backup and then intervened, whereupon the 50-year-old attacked him with pepperspray.