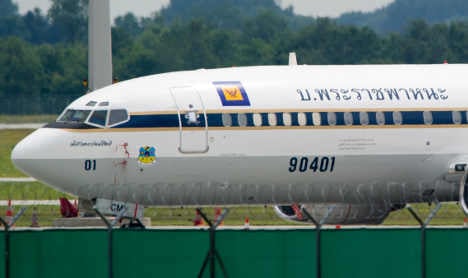 “The plane has been released,” Christoph Fellner, vice-president of the Landshut regional court in the southern state of Bavaria, said.

“The seals were removed at about 6 pm yesterday (Tuesday). For this to have happened, a surety must have been paid. I haven’t yet heard from the parties concerned as to whether the whole affair has been settled and if the main proceedings can now be dropped,” he added.

A spokesman for Munich airport, Edgar Engert, confirmed that the prince’s Boeing 737 had been released.

The seizure of prince Maha Vajiralongkorn’s plane on July 12 led to a diplomatic row between Thailand and Germany with Foreign Minister Kasit Piromya flying to Berlin for talks.

The plane was seized in a wrangle with the receivers of an insolvent German construction firm, who say they are owed more than €30 million ($42 million) by the Thai state.

Last month, a German court ordered the release of the impounded jet upon receipt of a €20 million guarantee, after assurances from Thai authorities that it was the private property of the prince and not that of the Thai state.

The business spat goes back more than 20 years to the involvement of the German company DYWIDAG, which merged with construction firm Walter Bau in 2001, in building a motorway link between Bangkok and the city’s Don Muang airport.

After “numerous breaches of contract by the Thai government,” Walter Bau, by then insolvent, claimed for damages in 2007.