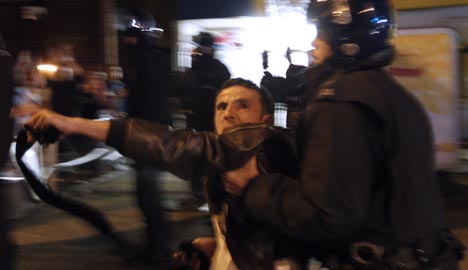 Rainer Wendt, head of the German Police Union (DPolG) told Wednesday’s edition of Bild that Germany shares the combustible social problems that have driven the massive riots in London and other major cities for the past four nights.

“The riots are the result of criminal energy, contempt for the state and the social marginalisation of certain groups,” he said.

This “highly explosive mix” also existed in Germany. Particularly in large cities such as Hamburg and Berlin, “such flashpoints could arise out of senseless provocation, which can only be contained with great difficulty,” he said.

Britain’s riots, which began in London on Saturday night after a 29-year-old man was shot dead by police, spread on Tuesday night to Manchester and the midlands. One man has been killed, more than 100 police have been injured and hundreds of people have been arrested in what is considered the worst civil unrest in decades.

Wendt cited the regular May 1 demonstrations in Hamburg and Berlin as examples of how similar unrest could swell up quickly.

“Police and politicians in Germany would be similarly overstretched in the early days of such massive riots as they were in Great Britain,” he said.

He said police needed better technical resources to monitor social networking sites and other communications methods, by which the British riots in many cases appear to have been organised.

However Interior Minister Hans-Peter Friedrich said in Potsdam on Wednesday: “I don’t believe that can happen in Germany.”

Earlier he had told the daily Neue Osnabrücker Zeitung he saw no signs of such youth violence in Germany’s major cities.

“Luckily we don’t have the kind of social friction of England and other European countries,” he said.

Germany enjoyed a consensus that violence against innocent people such as small business owners was no way to express one’s views, he said.

The centre-left Social Democrats’ interior affairs expert, Dieter Wiefelspütz, said such an outbreak in Germany was “rather unlikely.”

“We have a better safety net for social deprivation and less poverty in city areas than Britain.”

That said, Wiefelspütz agreed Germany needed to be vigilant, adding that “May 1 in Hamburg and Berlin shows what is possible here.”

The National Poverty Conference, a coalition of welfare groups, warned against seeing the arrest as purely an British phenomenon. Spokesman Thomas Beyer said in Berlin on Wednesday that many young people in Germany had a similar lack of prospects.

“We have to identify opportunities for young people. They need school qualifications, training places and real chances in the community instead of sanctimonious lectures about debt limits and demographic trends,” he said.