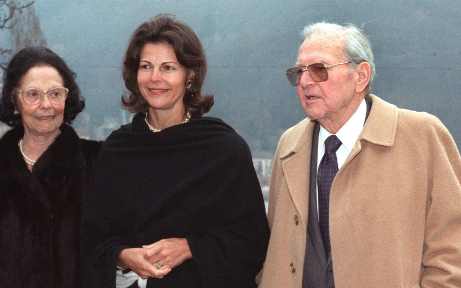 “I wasn’t afraid of what I would find when I started searching in the archives. I knew there was no reason to worry,” Queen Silvia said in an interview with local Gothenburg daily Goetheborgs-Posten published Tuesday as the royal court posted the report on its website.

The queen announced earlier this year she had commissioned a report, published Tuesday, concerning the activities of her father, Walther Sommerlath, in Brazil and Germany between 1930 and 1940, following reports about his controversial dealings with the Nazi regime.

While it has long been known that Sommerlath became a member of the National Socialist German Workers’ Party (NSDAP) in 1934 while he was living with his family in Brazil, the queen has insisted he was not politically active and had, as many others, been forced to join to save his career.

But in May this year, commercial broadcaster TV4 reported that Sommerlath had taken advantage of the Nazi’s “Aryanisation” programme to take over a German factory belong to Jewish businessman Efim Wechsler in 1939.

According to the 34-page report published Tuesday, written by Swedish historian Erik Norberg, archives indicate, however, that Sommerlath was doing Wechsler a favour and had traded part of a coffee plantation in Brazil for the Berlin factory in a move that made it possible for the Jewish business owner to leave Germany.

While historical research shows about 80 percent of Jewish properties taken over through the Nazi’s Aryanisation programme were acquired by people aiming only to enrich themselves, Norberg refers to studies showing that about 20 percent were taken over by “well-meaning businessmen who tried to pay reasonable compensation to the Jewish owners.”

“There is much to indicate that Walther Sommerlath belonged to the latter category,” he concluded in the report.

According to the report, the transaction between the two men appears to have provided Wechsler, who had already been stripped of his German citizenship and whose properties were in the process of being confiscated, with the documentation he needed to leave Germany and establish himself in

Sommerlath went to Brazil in 1920, aged 20, where he met and married the queen’s Brazilian mother Alice, whose family owned a large coffee plantation.

He moved the family back to Germany, taking over Wechsler’s electrical appliances company in Berlin in 1939, but soon faced pressure to transform it into a military supplier company, which it did in 1940, according to Norberg’s report.

However, the report stresses, “it might still appear that the company had been mobilised into the war economy at quite a late stage.”

The factory was destroyed in a 1944 bombing, and the family returned to Brazil in 1947.

In her interview with Goetheborgs-Posten, Queen Silvia stresses the report’s author did not uncover any evidence that her father had been an active member of the Nazi party.

“I have not been able to find information about him being active in the party in archives in Brazil or in Germany,” she said.

Silvia Sommerlath, who was born in Germany in 1943, met the future king of Sweden, Carl XVI Gustaf, at the 1972 Munich Olympics where she was working as an interpreter.