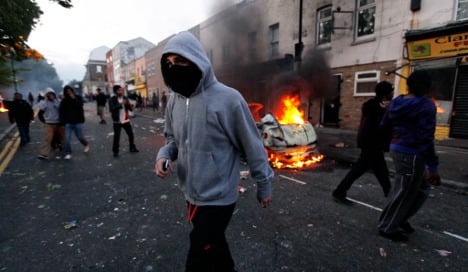 “Travellers are advised to exercise special caution, to immediately pull back if confronted with any signs of disturbance, and to especially follow advice given by security forces,” the German foreign ministry said in its online travel advisory.

“Travellers should also look to the media to keep themselves informed about the latest developments and act in an appropriate fashion locally,” the travel advisory added.

The warning followed the third night of rioting and looting in London, which by last night had also spread to major cities including Bristol, Birmingham and Liverpool. The ministry said that further outbreaks of violence could not be ruled out.

Home Secretary Theresa May said more than 450 people have been arrested in London over the three nights of violence, and Scotland Yard has said cells in police stations in the capital were now full, with prisoners being transferred to neighbouring forces.

Prime Minister David Cameron cut short his holiday to return to London. He has recalled the parliament and vowed that 16,000 police would patrol the streets of London on Tuesday night.