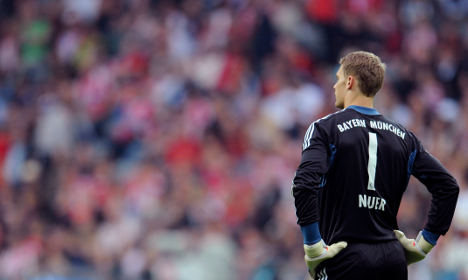 Despite having spent over €40 million over the summer, Bayern were left red-faced at their Allianz Arena by ‘Gladbach, who only narrowly avoided relegation last season.

“They spun a spider’s web and we allowed ourselves to get caught in it,” said Munich coach Jupp Heynckes, who has said he will only speak to Neuer and Boateng after the pair play for Germany against Brazil on Wednesday. “‘Gladbach also countered well here and there.”

The visitors grabbed the crucial goal in the 62nd minute after a mix-up between Germany defender Boateng and goalkeeper Neuer, two players who cost just over €35 million.

They failed to deal with a long ball and Belgium’s Brazil-born striker Igor de Camargo capitalised on the confusion to fire home on 62 minutes.

“It was my mistake which cost us the game,” admitted Neuer. “I held back a little as I didn’t want to foul him (de Camargo) in the process and give away a red card.”

Bayern looked to have equalised on 75 minutes, but Thomas Müller’s header was ruled offside and ‘Gladbach earned their first win over Bayern in Munich since 1995.

Bayern had come closest to taking the lead on 55 minutes when striker Mario Gomez clipped the post with a header.

Venezuelan midfielder Juan Arango then headed into the Bayern net on 59 minutes, but the referee ruled he had pushed Bayern vice-captain Bastian Schweinsteiger in the process.

Mainz opened the scoring on 32 minutes when striker Sami Allagui capitalised on a Giefer mistake to fire home from a tight angle before Toprak scored a late own goal.

Title holders Borussia Dortmund had started proceedings on the opening weekend of the season with an impressive 3-1 win over Hamburg on Friday thanks to two goals from Germany’s rising stars Kevin Grosskreutz and Mario Götze.

On Saturday, former Bundesliga champions VfB Stuttgart and VfL Wolfsburg picked up wins to go top of the table.

Germany’s Brazil-born striker Cacau warmed-up for Wednesday’s friendly against the South Americans in Stuttgart with a 37th-minute goal as 2007 champions Stuttgart enjoyed a 3-0 win over Schalke.

Hannover 96 were also winners with a 2-1 victory over Hoffenheim.

Having spent last season flirting with relegation, Bremen got their season off to a flying start with a 2-0 home win over Kaiserslautern as Sweden striker Markus Rosenberg netted twice in the second half.

Hertha Berlin, back in the Bundesliga after winning the second division last season, were beaten 1-0 at Berlin’s Olympic Stadium on Saturday night after Nuremberg’s 22-year-old Czech Republic striker Tomas Pekhart netted the winner.