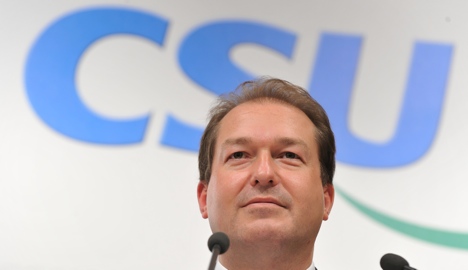 Dobrindt told Sunday’s Bild am Sonntag newspaper that Left party leader Gesine Lötzsch yearned for a path to communism, which is why the country’s domestic intelligence agency, the Verfassungsschutz, should observe the Left party more closely.

Dobrindt was referring to an article by Lötzsch entitled “Paths to Communism,” published in the newspaper Junge Welt in January.

“On this basis, we should re-assess whether the Left should be banned or not,” he said. Dobrindt also called on Berlin mayor Klaus Wowereit to declare that he would end the city’s coalition government with the Left party if he is re-elected on September 18.

Left party chairman Klaus Ernst responded by saying that such statements led to “a climate where right-wing extremists feel justified in attacking Left party offices in Berlin and elsewhere.”

“Whenever the CDU and the CSU are doing badly, some pitbull from the CSU comes along and acts as a crusader against the Left,” added Ernst. “Dobrindt would be well-advised to limit his right-wing tendencies.”

Last week, the office of Left party parliamentary leader Gregor Gysi was damaged in the Niederschöneweide district of Berlin. Other Left party offices have been attacked in the past.

He added that the call was particularly objectionable because Germany’s Interior Minister Hans-Peter Friedrich, also of the CSU, was currently doing everything he could to prevent a ban on the far-right National Democratic Party.

Ulrich Maurer, deputy parliamentary leader of the Left party, said the CSU general secretary “has apparently not noticed that the Cold War finished over 20 years ago. That’s a bit embarrassing.”