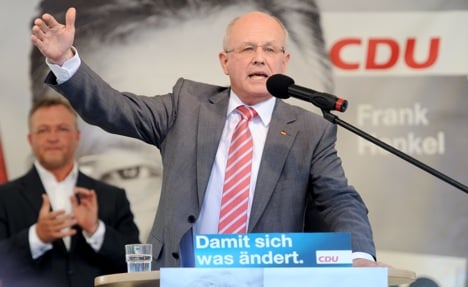 “We are going into the election year 2013 with the same coalition,” Kauder told Die Welt newspaper. “I don’t think people believe it does them much good if the CDU discusses itself or the coalition.”

Now roughly midway through its first term, Kauder said the government had to admit “that the first half was not that great. But we can still turn the page in the second half.”

“We are going to come out in the second half with the same team we went into the break with, and we will improve” Kauder added. But he admitted that negotiations between the coalition partners were often hard to mediate.

Grass-roots CDU members have been criticizing Merkel ever more vocally in recent weeks for abandoning what they see as the party’s core values, and also for not showing principled leadership on issues like nuclear power.

CDU General Secretary Hermann Gröhe told the Kölner Stadt-Anzeiger on Saturday that he welcomed appeals to clarify the party’s policy, but added, “The more concrete the criticism the better.”

The chairman of the CDU’s social committee Karl-Josef Laumann had less patience with Merkel’s critics. “Some people in the CDU still yearn for the good old days,” he told the Frankfurter Rundschau newspaper on Saturday.

“The old East-West conflicts are over,” he said. “You can’t go round putting ‘Freedom or Socialism’ slogans on posters anymore.”