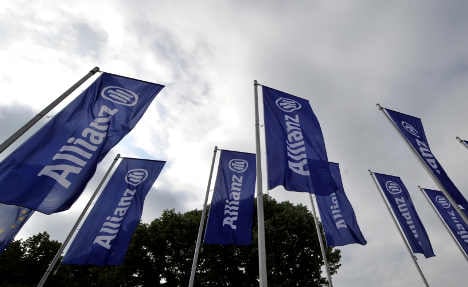 Allianz’ operating profit was stable compared with the same period a year earlier, at €2.3 billion, topping analyst forecasts for €2.14 billion as compiled by Dow Jones Newswires.

Allianz said that it had reduced the value of its Greek bond holdings to their current market value which entailed booking a charge of €644 million.

Some of that amount was charged to clients, and the group also got a tax rebate on the loss, leaving the impact on its net result at €326 million.

Allianz chief executive Michael Diekmann said in the statement that “these are very satisfying results.”

He said the second quarter and first half figures were “remarkably solid considering the high level of natural catastrophe events, the uncertainty of the capital markets, currency fluctuations and, last but not least, the current impairment of our Greek sovereign bond portfolio.”

Diekmann said that despite the insurer’s second quarter losses, Allianz would meet its 2011 operating profit target of €8 billion, plus or minus €500 million.

German re-insurance giant Munich Re has also written down the value of its Greek bond holdings, but insurers and banks in the country have not said to what extent they plan to participate in a second Greek rescue package backed by the European Union and the International Monetary Fund.

Part of the programme calls for private investors to either voluntarily extend the maturity of their bonds or sell them back at a discounted rate, taking a loss estimated at some 21 percent.

On Thursday, the European Central Bank resumed purchases of sovereign bonds issued by heavily indebted eurozone countries but the intervention failed to stop a massive sell off of stocks in Frankfurt and on other global markets.