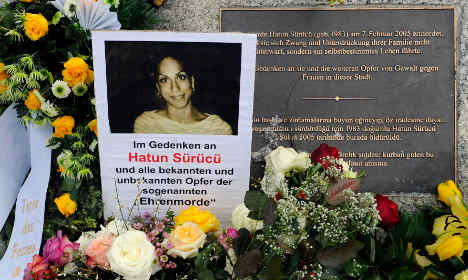 A study commissioned by the Federal Office of Criminal Investigation (BKA) showed that although there have been some particularly bad years, such as 2004 when there were 12 such killings, generally there are between seven and ten a year.

Of these only two or three a year are motivated by the impression of disgraced family honour, study co-author Julia Kasselt from the Max Planck Institute for Foreign and International Criminal Law told The Local on Wednesday.

“The classic, traditional case where it is a blood relative of the woman who kills her – her father or brother or first cousin for example – of these we found about 20 cases over the 10 year period we examined,” she said.

Many of the rest of the cases – dating from between 1996 and 2005 – approached the borderline to typical partner murders, where the woman is killed by her husband or boyfriend out of sexual jealousy.

Yet normal anger, frustration and embarrassment from relationship problems can be exacerbated by other factors which push in the direction of honour-related violence.

Turkish and other immigrant communities can exert huge pressure on a cuckolded man Kasselt said, with his family and sometimes the family of the woman, as well as friends and acquaintances pounding home the idea that she has damaged his honour – which can only be restored by her death.

But this perception of “honour” is more traditional than an especially Muslim attitude, said Kasselt.

“It is more cultural, traditional, than strictly Islamic – and it is something that some migrants who have for one reason or another had difficulty finding a place in German society, sometimes cling to.

“There is a theory which deserves some examination that people who have left their homeland and failed to find a good job, or education, or other success in their new countries cling all the more tightly to old-fashioned traditions from home in an effort to maintain their feelings of honour and identity.”

She said that it was often the case that the idea of old-fashioned honour being based around a woman’s chastity and obedience was being rejected in the countries from where the immigrants have come – while those who have left continue that way of thinking.

The question of how Muslim honour killings are, was a complicated one, she said.

“Of course people say Islam plays a big role, and you can say that they would be supported by Sharia law, but the Koran absolutely does not include such things. Although the Koran does support the subordination of women by their men,” she said.

“It is important to know that this is not just a Muslim thing too – we saw Orthodox Christians perpetrators in the study too, who were talking about honour. Although others did not even mention their religion and just spoke about honour.”

The study also unearthed an unexpectedly high number of male victims of honour murders – 43 percent of those killed were the men considered to have damaged the woman’s honour – her new, alleged or unapproved boyfriend in most cases.

The most positive aspect of the study was that more than 90 percent of the perpetrators were first-generation immigrants, who although they may have lived in Germany for a long time, had with few exceptions, not become German citizens. Even among the offenders under the age of 30, most were born and initially socialised outside of Germany.

Almost all the perpetrators were poorly educated and were either unemployed or had non- or low-skilled manual labour work, it said.

“Thus, although honour killings have cultural roots, social disadvantages and lack of education are important causes that should not be overlooked (as with almost all violent phenomena),” it said.

These factors give hope that with more successful integration, education and employment policies for immigrants – and with time – the number of honour killings can be reduced or even ‘socialised away’, agreed Kasselt.

The problem of domestic violence leading to murder or manslaughter remains a threat to women from all walks of life though.

In 2009, Kasselt said, police statistics showed there were around 350 murders or manslaughter cases in Germany where women were killed. As the majority of women who are killed are the victims of their partners, it would seem that honour killings are comparatively much rarer than the media coverage they generate might suggest.

A recent decision by the German Federal Court of Justice held that honour killings are generally to be considered homicide with base motivation – murder. Yet this is not yet being followed by many of the lower courts trying such cases.

Kasselt’s research suggested that district courts broadly interpreted the exception which the court laid down which plays to the perpetrator’s favour if it is shown they are particularly anchored to their native values, making a conviction of manslaughter rather than murder an option.