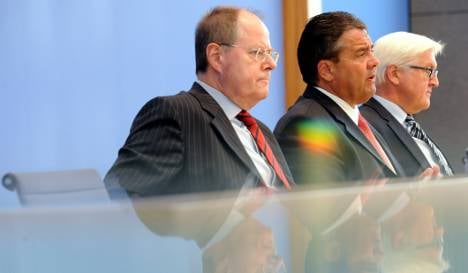 A survey conducted for the news magazine Stern and television channel RTL put the SPD at 26 percent, a significant improvement on the 22 percent it was able to chalk up at the start of June.

The Chancellor Angela Merkel’s conservative Christian Democratic Union (CDU) and its sister party the Christian Social Union (CSU) dropped a point in comparison to the previous week’s results, landing at a combined 32 percent, while the other parties were stable in their approval ratings.

The poll put the environmentalist Greens on 22 percent, socialist The Left got 10 percent and the Free Democrat Party was flat-lining with three percent.

A potential coalition of the SPD and Greens, with a combined poll of 48 percent would have a 13-point lead over the current ruling Union-FDP coalition which would have just 35 percent.

The SPD’s recovery was due to a number of factors, Manfred Güllner, head of polling company Forsa, told Stern.

“They have a certain clout together,” said Güllner. “Much is reminiscent of the good old days with [Willy] Brandt, [Helmut] and [Herbert ] Wehner. And it allows the personnel deficits of the SPD to be forgotten.”