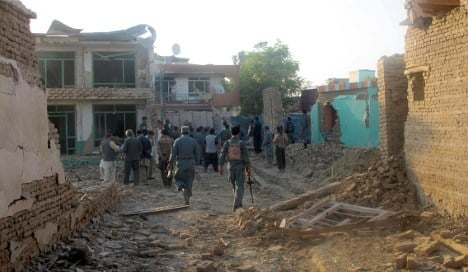 No Germans appear to have been among the casualties, but the Taliban, in claiming responsibility for the attack, told the Associated Press they had targeted a “German intelligence centre and security company.”

The attacks come amid a deteriorating security climate in Kunduz city and province of the same name, which is garrisoned by German troops.

The building that was attacked has for several months housed the offices of Lant Defence, a German security firm that protects workers from the German GIZ development agency. The GIZ told news magazine Der Spiegel that a suicide bomber had detonated his car loaded with explosives at the gate of the building.

This was then followed by an attack by two other gunmen. All three were killed, along with three policemen, in the two-hour gun battle that followed. Der Spiegel reported. Other news reports said four guards at the compound were killed in the initial blast.

Various media reports said up to 10 civilians were injured. A spokesman for the Foreign Ministry in Berlin said that no Germans appear to be among the casualties. A spokesman for the GIZ said none of its staff were in the building at the time of the attack, according to Britain’s Daily Telegraph.

The once-quiet province has become one of the more dangerous parts of the war-torn country since the Taliban began using it as the launching ground of its northern front against the Afghan government and NATO.

The governor and police chief of Kunduz have both been killed in the past year. And conditions for aid workers have become steadily more dangerous.

The building was formerly a guesthouse known to be popular with Germans. A former Bundeswehr soldier had run the guesthouse as a German hotel and restaurant, though he closed this last year. The restaurant was previously a popular dinner venue with German aid workers.