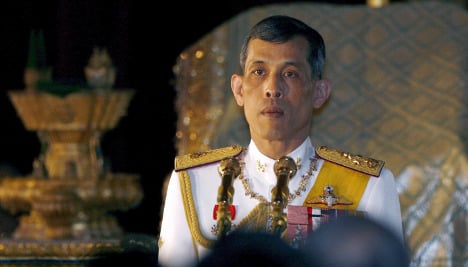 Maha Vajiralongkorn’s Boeing 737 was seized at Munich airport on July 12 in a wrangle with the receivers of an insolvent German construction firm, who say they are owed more than €30 million by the Thai state.

Last month, a German court ordered the release of the impounded jet upon receipt of a €20 million guarantee, after assurances from Thai authorities that it was the private property of the prince and not that of the Thai state.

A statement released by the prince’s office late Sunday said that to avoid problems between the two countries, the royal would “offer his personal money to stop the dispute” involving the German firm Walter Bau.

“Even though Crown Prince Maha Vajiralongkorn does not have any part in the dispute between the Thai government and Walter Bau AG, it has affected him and his reputation,” the statement said.

It did not make clear how much the prince would pay out,, though it is thought he is paying the full €20 million ordered by the German court.

The German court said it set the guarantee to reflect the estimated value of the plane, which the prince is said to often pilot himself.

Court officials said the guarantee was needed after documents from Thai authorities provided only a “presumption of ownership”.

Thailand’s Foreign Minister Kasit Piromya flew to Berlin following the seizure of the aircraft, calling the incident a “huge mistake” and meeting a senior German foreign ministry official to press for the plane’s release.

The German government had stressed that it was a matter for the courts.

The business spat goes back more than 20 years to the involvement of the German company DYWIDAG, which merged with construction firm Walter Bau in 2001, in building a motorway link between Bangkok and the city’s Don Muang airport.

After “numerous breaches of contract by the Thai government”, Walter Bau, by then insolvent, in 2007 claimed for damages.