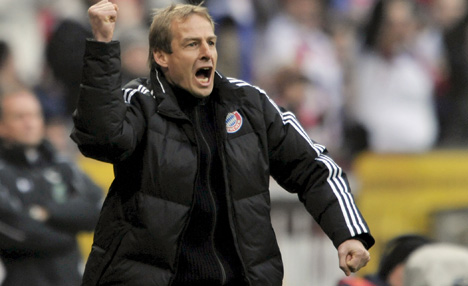 “I am proud and honoured to be named the head coach of the US Men’s National Football Team,” Klinsmann, who turns 47 on Saturday, told US Soccer.

“I would like to thank the US Soccer Federation for the opportunity, and I’m excited about the challenge ahead.”

“I am looking forward to bringing the team together for our upcoming match against Mexico (on August 10 in Philadelphia) and starting on the road towards qualifying for the 2014 World Cup.”

US Soccer President Sunil Gulati expressed his delight at the appointment, saying: “We are excited to have Jürgen as the head coach of our men’s national team.

“He is a highly accomplished player and coach with the experience and knowledge to advance the program. Jürgen has had success in many different areas of the game and we look forward to the leadership he will provide on and off the field.”

He already has experience of coaching at international level, having led his native Germany to third place at the 2006 World Cup on home soil.

However, he was sacked from his last coaching position at Bayern Munich five games before the end of the 2008/09 season, and has not worked in a dugout since, choosing instead to devote time to his role as a partner with a sports marketing consultancy.

Klinsmann is very familiar with the US, though, having moved to California with his American wife after retiring from playing in 1998.

He was linked with the US coaching job in 2006, only for US Soccer to opt for Bradley instead, and was also reportedly close to taking charge at the LA Galaxy in 2007, before the MLS club appointed Ruud Gullit.

Klinsmann will be formally unveiled at a press conference in New York on Monday, and will be charged with the task of leading the USA to a seventh consecutive World Cup finals.

After taking on Mexico, the team will also have friendly matches against Costa Rica and Belgium to look forward to before the 2014 qualifying campaign begins in earnest.

Bradley was sacked when US Soccer decided it was “time for us to make a change” following the 4-2 defeat to Mexico in the Gold Cup final.

Meanwhile, current Germany coach Joachim Löw, who served as Klinsmann’s assistant during the former’s spell in charge of the national team, said he was delighted by the news.

“I am very happy for Jürgen and to see he has found himself a new challenge. I wish him the best of luck. Knowing Jürgen as I do I am sure he will take up the cudgels with gusto and really get things moving,” said Löw, who learned of the decision by telephone.

German Football Federation (DFB) president Theo Zwanziger added in a statement: “I am happy for Jürgen that he has this opportunity. We at the DFB know from our own experience that he is a very good national coach.

“I can only congratulate the Americans on their choice.”