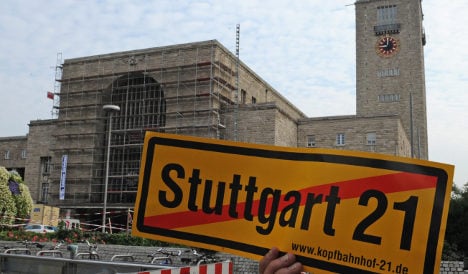 Advocates and opponents exchanged insults and accusations as the details of a recent set of projected capacity tests were released. The tests put the €4 billion rail project, which aims to turn the Baden-Württemberg capital into a major European transport hub, through a range of hypothetical situations.

The results support the claim of railway operator Deutsche Bahn that the project could result in at least 30 percent increased capacity.

But the coalition of groups opposing the project condemned the experts analysis as worthless because Deutsche Bahn, which is in charge of the project, used skewed assumptions to come up with the data.

The opponents argue the parameters of the tests were “systematically limited” and called for fresh tests to probe whether the project could actually function properly in adverse circumstances.

It was already known that the controversial, multi-billion euro project had passed the tests. Experts had previously confirmed the construction was ready to go ahead.

The stress tests were part of a conciliation process that began late last year and was meant to bring the two sides together towards a compromise.

Kefer pointed out that both sides had agreed to the appointment of the Swiss engineering firm SMA as the independent expert who conducted the tests.

“We wanted a neutral expert,” he said.

However the opponents had at the beginning of the year called for a second agreed expert to be added.

On Friday, Tübingen Mayor Boris Palmer, also of the Greens, even accused SMA of bias, pointing out that it is bidding for a major tender recently put out by Deutsche Bahn.

“That is a conflict of interest,” he said.

Arbitrator Heiner Geißler, a former general secretary of the conservative Christian Democratic Union who was appointed to mediate between the two sides in October last year, rejected this criticism.

“I will not allow someone to put the experts under suspicion,” he said.

That said, Geißler backed the opponents claim they had not been fully included and admonished Deutsche Bahn for being one-sided.

“On this question, I’m fully behind the critics,” he said.

Previously, he had declared a further stress test was out of the question, telling broadcaster ZDF that the tests had been carried out perfectly.

“Even the state government says that,” he said.

Baden-Württemberg premier Winfried Kretschmann of the Greens, who oppose the project, has previously raised the possibility of a further assessment. Transport Minister Winfried Hermann, also of the Greens, backed the idea. It wasn’t necessary to have a complete new stress test, but another simulation run should be conducted.