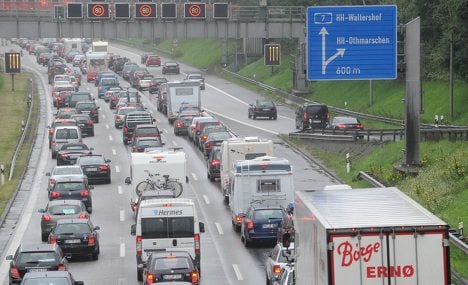 “One is quite certainly not going to be alone,” said Klaus Reindl of ADAC, the country’s biggest automobile club.

He said roughly 150 ADAC motorcyclists will be out on the nation’s motorways this weekend, handing out refreshments and games to families stuck in traffic jams.

Though bad traffic is a perennial obsession in Germany, the summer months tend to be the most psychologically taxing for drivers trying to get to a favourite holiday destination.

Gridlock is of particular concern when various German states start school vacation at the same time for the summer break.

No one knows exactly how bad this weekend might be, although there are roughly 500 motorway construction projects this year – 100 more than this time last year.

Although autobahn traffic jams may often be inevitable, drivers, to some extent, hold their fate in their hands, said traffic researcher Martin Treiber from the Dresden University of Technology.

In case of a traffic accident, stay on the main motorway unless you know the back roads very well and avoid making multiple lane changes, he suggested. Although changing lanes may seem to make sense, it is actually often counter-productive because it disrupts the flow of traffic, according to research.

A European Union study showed traffic jams in Germany cause €10 billion to €20 billion in costs annually, including lost productivity. This corresponds to nearly 1 percent of the country’s gross domestic product.

All motorways around the metropolitan areas of Hamburg, Berlin, Cologne and Munich