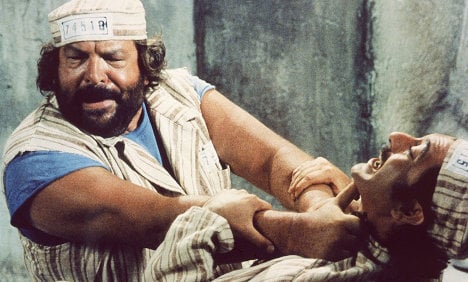 Instead, they have decided, they’ll name a swimming pool after him in homage to his brief swimming career, which included an appearance at the 1952 Olympic Games. A final decision on the tunnel name is due in September.

The decision came at a sometimes tumultuous city council meeting on Wednesday that was filled with Bud Spencer fans who booed and protested.

Thousands of Germans have swarmed the website of the southwestern city, voting to name a tunnel currently under construction after Spencer, an Italian actor who starred in dozens of action movies with his on-screen cohort Terence Hill.

In what started as an exercise in civic participation, Schwäbisch Gmünd city officials collected public suggestions for the tunnel’s name. After sifting out blatantly offensive options, they then put them all on the internet and invited people to vote earlier this year.

But before long, a groundswell of support for the Bud Spencer Tunnel had formed, apparently driven by a campaign on the social networking website Facebook.

More than 20,000 people claim to have voted to name the tunnel after Spencer, prompting bemused city officials to claim the voting was hijacked by outsiders. Schwäbisch Gmünd, best known for producing gold and silver handicrafts, has just 62,000 people.