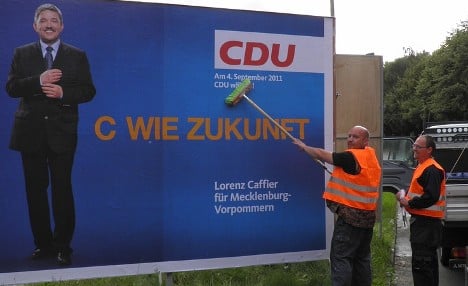 Billboards showing Lorenz Caffier, the CDU’s main candidate for a September 4 election, started going up across the northeastern state along Germany’s Baltic coast this week.

But the campaign ad’s tagline “C wie Zukunft” has sparked widespread derision and mockery for its apparent illiteracy. A parody website has even been set up to lets people pick slogans with other words that don’t start with the letter C.

Recent suggestions included “C as in who needs orthography?” and “C as in kappuccino.”

On Monday, the Mecklenburg-Western Pomerania state chapter of the CDU felt obliged to respond to the controversy in a statement posted on its website.

“We had hoped to get people talking. It worked. The poster works,” said Vincent Kokert, the party’s general secretary in the state. “The slogan ‘C as in Future’ has got people talking about the CDU!”

He said the C in the slogan was meant to refer to Caffier’s surname and that the conservatives would just have to live with the ridicule.