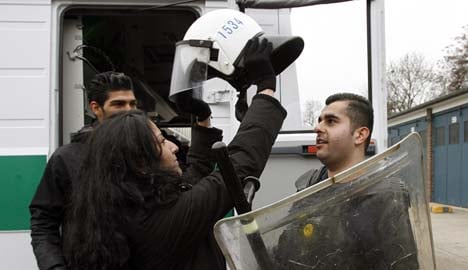 Also, many officers would be retiring in the coming years, creating gaps that urgently needed to be filled.

Many state interior ministries, meanwhile, are already pushing for more recruitment of immigrants for their police forces. However some have told a survey by news agency DAPD that there were often problems finding qualified candidates. In particular, candidates with immigrant backgrounds often failed on language skills.

The call comes amid a heightened fear about anti-immigration, far-right extremism in the wake of the Norwegian massacre, in which avowed xenophobic nationalist, Anders Behring Breivik, killed at least 76 people in a shooting rampage and a bomb attack.

Witthaut warned against lowering entry criteria, saying standards had to be maintained.

While state police figures are difficult to collect, federal police figures show a paltry share of officers with immigrant backgrounds. Of 33,000 officers, just 463, or about 1.4 percent, have foreign roots.

Many states already have recruitment drives among people with foreign roots. Police go to schools and try to persuade immigrant students “that it is important to engage with society,” Witthaut said. “And a job with the police could be one way to do that.”

In some states, the campaigns go further, with multilingual flyers distributed in immigrant neighbourhoods, advertisements in foreign-language local newspapers and internet campaigns.