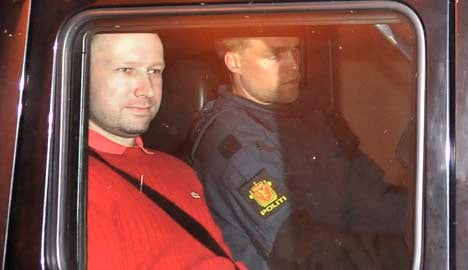 As German politicians debated what, if any, new measures were needed in the wake of the massacre, Bernhard Witthaut, head of the Gewerkschaft der Polizei (GdP) police union said authorities needed help from the public.

“It’s important that we are all vigilant about such things and all help to ensure such attacks don’t happen. The police can’t do it on their own.”

His remarks came as a debate re-emerged about the controversial technique of internet and phone data-gathering, under which all German web use and phone call records would be automatically stored for a certain period. After politicians from the ruling conservative Christian Democratic Union (CDU) and their Bavarian counterparts the Christian Social Union (CSU) called for a re-examination of data-gathering, opposition politicians slammed the calls.

Witthaut, meanwhile, said Anders Behring Breivik, the Norwegian far-right nationalist who has admitted responsibility for the mass shooting on the island of Utoeya and the bombing in Oslo, was active on the internet for more than a year, leaving many clues about his beliefs and intentions. Breivik killed at least 76 people.

Witthaut appealed to users of blogs and internet forums to “pick up the phone and inform the police” whenever they came across somebody expressing violent extremist views.

However he also acknowledged that the completely safety of the community could never be guaranteed, especially when lone perpetrators were responsible.

“Such a crime is very, very difficult to prevent,” he said. “We could be affected just the same in Germany.”

Witthaut also rejected conservatives’ call for the immediate reintroduction of the controversial internet and phone data-gathering surveillance in the wake of the Norway masssacre. Witthaut said the technique would not have helped in this case – though the union supports the technique in general.

Andrea Nahles, general secretary of the centre-left Social Democratic Party (SPD) said more monitoring of the far-right scene was needed but rejected suggestions that tougher laws, including data-gathering, were needed.

“We have to have more police who are able to observe the right-wing radical scene on the internet,” she told the Rhein Zeitung.

But it was “not right” that the tragedy should be used to push through data-gathering laws.

The SPD would also look at the need for tighter security at its own youth camps. The next SPD camp is planned for Berlin in 2013.

Greens co-chairwoman Claudia Roth made a similar call, saying that although the far right should be more closely watched, the conservative government “should not use the tragedy to grandstand on an old issue,” referring to data gathering.

One of Germany’s top experts on political extremism, Eckhard Jesse, told the Ruhr Nachrichten that the far-right scene was most likely steadfastly against the Norway attacks.

“These crimes are probably being rejected by organised right-wing extremists. People would distance themselves from anyone who had sympathy,” said Jesse, who is a professor at the Technical University of Chemnitz.

He also expressed doubt about Breivik’s own claim that right-wing extremist groups were behind the attacks.

“This is the crime of an unbalanced individual.”