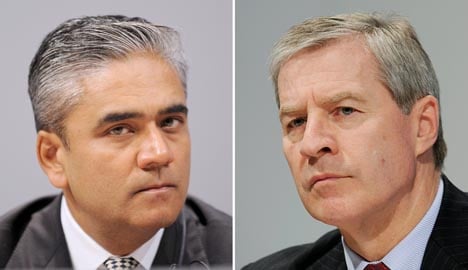 Anshu Jain, 48, and Jürgen Fitschen, 62, were named joint chairmen of the Frankfurt-based bank to succeed the Swiss Josef Ackermann, 63, when he becomes chairman of the supervisory board.

The board mandates for Fitschen and Jain were also extended for three and five years, respectively, a statement said.

Jain, originally from northwest India, currently heads Deutsche’s most powerful section, its corporate and investment banking division, which accounts for the lion’s share of group revenues and profits.

He first cut his teeth at Merrill Lynch in New York before moving to his present employer in London in 1995, and was generally seen as having had a “good” 2008-09 financial crisis, quickly returning his unit to profit.

The cricket-mad banker, who captains the bank’s team in London, has long been groomed by Ackermann to step into his shoes running a bank so international that half of its 100,000 employees are outside Germany.

“I fully endorse the decisions taken by the supervisory board today,” the statement quoted Ackermann as saying.

Boersig said the bank wanted to retain Ackermann to “continue to profit from his knowledge, experience and professional network.”

A large part of the chairman of the 141-year-old bank’s job is to hobnob with the country’s political and business elite.

Ackermann has become the German banking industry’s main contact person for the German government as the eurozone debt crisis escalated in recent months, writing newspaper commentaries and appearing on television.

Deutsche also has significant private and retail banking operations, not least in Germany, areas which are being expanded via acquisitions and which Jain, more at home in London’s City or on Wall Street, would also have to run.

This is all something that Jain, who doesn’t speak German – although he is said to be learning – is expected to be find tough, hence the decision to appoint a veteran German banker to run the bank alongside him.

They vowed on Monday to make a dynamic duo.

“I could ask for no better partner than Anshu in building further on the banks success in our home market and worldwide,” Fitschen said.

Jain commented meanwhile that “I’m humbled and honoured at having been asked to lead this great institution together with Jürgen.”

Fitschen “is seen as the face of Deutsche Bank in the national economy,” the Frankfurter Allgemeine Zeitung daily said in a recent profile. “He has everything that Jain doesn’t have, and still gets on well with him.”

Fitschen did not join Deutsche Bank until he was nearly 40, but his rise has been steady, with stints in Asia and London before becoming head of the bank’s Germany unit in 2005 and Ackermann bringing him onto the board in 2009.

Die Welt daily said he is seen in the bank as a “nice guy … but too nice.” He and Jain worked together in London, and the Indian is “Jürgen’s biggest fan,” the paper quoted an anonymous colleague as saying.

Deutsche Bank has had a leadership duo – a management model widely seen as outdated – before, although not since the 1980s, and it remains to be seen if this one will work, according to analysts.

“It is a model that is prone to problems,” Konrad Becker, banking analyst at Merck Finck, said. “It always runs the risk of their being a clash of personalities and rivalries and so on … It depends on the personalities, how they get on. It is a risk.”