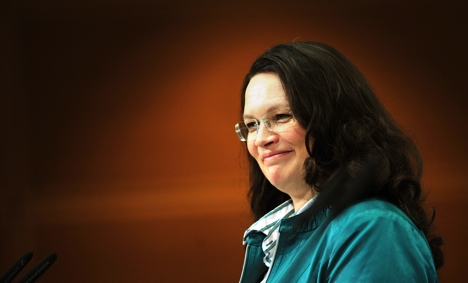 Nahles told the Hamburger Abendblatt newspaper, “The parties should agree on a set day – ideally Sunday – when everything that has anything to with politics should be given a rest.”

This would allow politicians to spend more time with their families and gather energy for their work, she believed. She pointed out that the Swedish government made sure that its business was conducted in family-friendly hours, “and that country is not falling into chaos.”

Nahles, who had her first baby in January, said in the interview that since then she’s been more concentrated in her work and found extra reserves of time for her family. “I leave the odd official dinner out of my diary,” she said.

Nahles also said she was in favour of a gender quota for top company positions. “Equality cannot be built on a voluntary basis,” she said. “The male networks are too tight for that. We have a female proportion of 3.1 percent on the boards of stock market listed companies. I think there should be a compulsory quota of at least 40 percent.”

The SPD general secretary said the party’s gender quota certainly helped her in her early career.