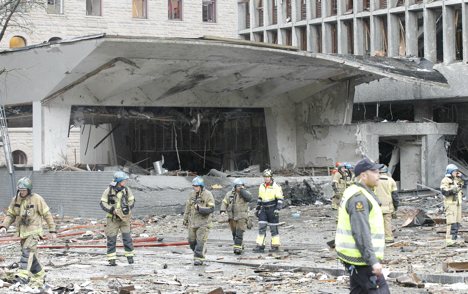 Wulff said in the message that he was horrified and shocked when he heard of the attacks. “I would like to express to you, also in the name of my compatriots, my deeply felt sympathies,” the message said. “Germany and the Germans will stand firmly by your side in this dark hour.”

Foreign Minister Guido Westerwelle echoed Merkel’s sentiments on Friday evening, shortly after arriving back in Berlin from a trip to Afghanistan. He also sharply condemned the attacks. “There is no justification for these barbaric acts,” he said. “These attacks show that we in Europe also have to be vigilant against terrorism and terrorist attacks.”

A car bomb was set off in the government quarter of Oslo on Friday afternoon, killing seven people and injuring at least 15 more. According to Norwegian police, one to two hours later, a man opened fire on a youth camp on Utøya, an island to the north of the capital which was hosting a youth camp by Norway’s ruling Labour Party. At least 80 are thought to have been killed there.

A 32-year-old has been arrested in connection with both attacks. Norwegian state broadcasters have identified him as Anders Behring Breivik. Media reports suggest that the suspect had no direct connection with terrorist organizations.

The German Foreign Ministry is also advising German tourists in Norway to avoid Oslo’s city centre, and to exercise caution.