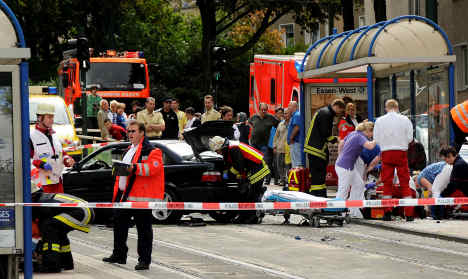 A 60-year-old man was so seriously hurt that he was flown to a hospital in Duisburg in a rescue helicopter. The children who were hurt were aged four, 13 and 14, the police said.

The 22-year-old driver of the BMW car was only slightly hurt, while two witnesses were treated for shock.

A police spokeswoman told The Local the driver was in hospital as of Friday afternoon, and that it was not yet clear when he would be available to answer questions.

An investigation has been launched to determine why the driver lost control of his car and whether, for example, he was driving too fast.

The tram stop he smashed into is situated in the central strip of the road – Martin-Luther-Straße.