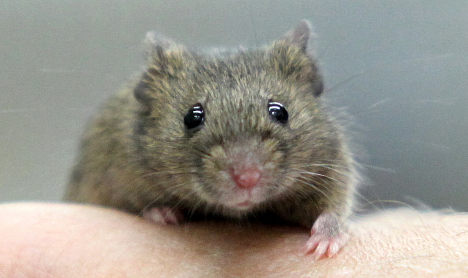 “We have a population of mice from the Bonn-Cologne area of Germany, and another group from the Central Massiv in France and have been looking at them for three or four years,” said Christine Pfeifle, chief mouse keeper at the Plön Max Planck Institute for evolutionary biology. “It looks as if they like their own kind when it comes to mating.”

She told The Local there was not enough evidence to be conclusive yet, but that it certainly seemed that the French souris keep their distance from the German Mäuse.

“We are looking for a possible reason why this should be the case. We know that pairing behaviour involves ultrasound noises, or singing, and there could be an accent or dialect which distinguishes between the different groups,” she said. “But smell is also important to mice, they leave messages with their urine, and this could also be a factor.”

German and French mice are of the same species – Mus musculus domesticus – which originally came to Europe with people migrating from northern Africa. Fossils show that they arrived in Spain around 3,000 years ago.

There is another kind of mouse in Europe, the Mus musculus musculus, which arrived much earlier – around half a million years ago, with the people who came from Asia and India across the Caucasus, said Pfeifle.

They never really met up in the middle, leaving a mostly mouseless strip through central Germany and Austria, and even into Denmark, she said.

Although they are originally the same species, their long geographic separation, continuing even in recent times in Europe, has increased the differences between them.

“In Bavaria for example, you get both kinds, and they can and do breed with each other, but their babies are not so fertile and not as healthy as those from pairs of the same kind,” said Pfeifle. “Their genomes are different enough to make a difference.”

This is evolution in action, giving rise to different species which will in time be unable to successfully cross breed.

In other mouse news, researchers in Germany and the US reported this week that they had discovered a freak mouse which was resistant to the anti-coagulant warfarin, commonly used as rodent poison.

The mice were found in Hamm, Westphalia, and are thought to have inherited the crucial genes from Algerian mice.

“We have caught evolution red handed here,” said Michael Kohn from the Rice University in Houston.

Because they live in the desert, those mice in Algeria which can survive on a diet poor in vitamin K have survived and therefore bred better than those which cannot, and passed on this characteristic. This also makes them resistant to warfarin as vitamin K is important in the blood clotting mechanism.

The cross-breeding of the Algerian mice with those in Hamm must have taken place between 10 and 20 years ago, genetic analysis suggests, according to a paper published in the current edition of scientific journal Current Biology.