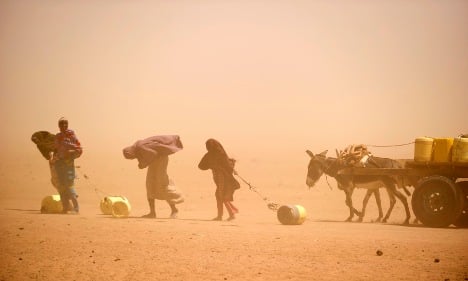 Appeals to help victims of the earthquake disaster in Haiti attracted donations of more than €7 million within days, said Manuela Roßbach, a manager with the organization, but so far projects to help those caught in the famine in Somalia, Ethiopia and Kenya have only received €800,000.

Willingness to help African causes, in general, has been relatively low in Germany, Roßbach said on Friday.

“The catastrophe in east Africa has been building up for a long time but because of a lack of publicity, and therefore missing financial means, the necessary measures could not be carried out sufficiently in the regions concerned,” she said in a statement.

“This is why it is even more important to help the people quickly. Donations for this are urgently needed.”

Desperate people are still leaving areas of Somalia affected by the civil war, heading from the rebel-controlled south, to the capital Mogadishu, where they are ending up in camps. The BBC reported on Friday that some of those arriving are dying.

“They are braving the dangerous journey to find help, but for many it is too late,” a journalist on the ground reported.

Doctors in the Somalian camps have treated thousands of undernourished babies and children in the last nine days alone. Mothers with starving children are standing in line for hours in order get the most rudimentary help.

More than 11 million people are currently affected by the worst drought for 60 years, said Matthias Mogge from the Deutsche Welthungerhilfe charity on Friday.

The immediate need is to save lives, he said, but a network of help is needed in order to help people in Somalia in particular, to improve their situations at home so they are not driven from their country by hunger. “Refugee camps are not a solution,” he said.

He said global warming was a significant factor in the failure of crops, and that therefore long-term programmes should be put in place to enable people to stay in their regions to prevent large migrations of hungry people which provokes instability in the region.

The German government has said it would increase immediate aid for the region by €14 million. But the United Nations said in the last few days that around $1.6 billion (€1.1 billion) was needed each day.

Development Minister Dirk Niebel told the Saarbrücker Zeitung that international efforts were being made to gather the money needed. So far, pledges worth $880 million have been secured, the paper said.

Niebel said that Germans had proven themselves generous in donating for previous disasters such as those in Haiti and Pakistan. “I would be pleased to see the willingness to donate for famines grow,” he said.