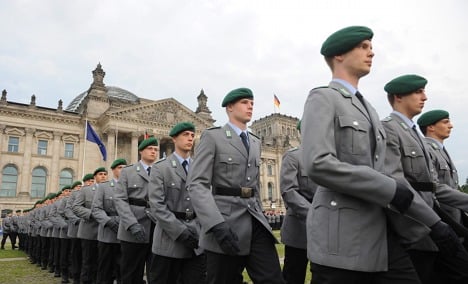 As in many Western military forces, prospective soldiers are allowed to leave the service during basic training – in Germany they can leave at any time on short notice during a six month probation period.

The daily Hannoversche Allgemeine Zeitung (HAZ) reported on Friday that 14 percent of recruits in one battalion in Lower Saxony had quit in the first few weeks of the new system that started July 1. At a Berlin battalion, the drop-out rate was 10 percent.

The Bundeswehr immediately pushed back against the report, saying official numbers nationwide aren’t yet available. A spokesman told the newspaper that some new recruits were always expected to quit, and it was a “normal process.”

About 30 percent of the people who quit the Bundeswehr did so for medical reasons or because they could not quickly get physically fit. But other recruits left for personal reasons, such as feeling overwhelmed or believing they could never get used to barracks life, according to the HAZ.

Jan-Piet Jaschinski, a 19-year-old failed recruit, told daily Die Welt that he wanted to enter the military to challenge himself, but became frustrated in just his first few days of training.

“We had to stand at attention for two hours in front of a building just to briefly go in to answer a question and leave a signature,” he said.

After that, Jaschinski quickly decided he would rather enrol in a university politics and economics course.