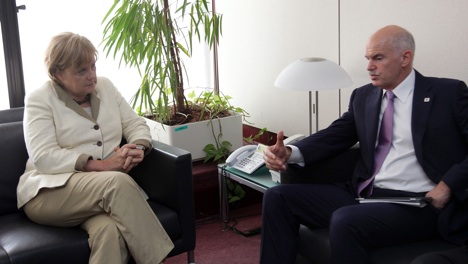 “For people in Germany today it means more security for our common currency and therefore a foundation for our economies and overall prosperity,” she said after hammering out a deal with eurozone leaders at a crisis summit in Brussels.

She said the euro was more than simply a currency used by 17 nations including Germany, but was rather an “expression of great unity” across Europe.

Merkel said she was pleased with the end result of the summit, which was called to shore up Greece and other eurozone members struggling with crippling debt.

“We reached an important milestone today,” she said, adding that the eurozone had demonstrated that it was “up to the challenges” poised by “difficult times.”

The EU leaders meeting in Brussels agreed to another aid package for Greece totalling €109 billion, plus measures for other countries battered by the financial markets.

According to the deal, European loans to Greece will also be extended by at least 15 years at a lower interest rate of around 3.5 percent. Private investors will also pitch in some €50 billion toward the bailout of the Mediterranean country.

“We did two things today,” Merkel said. “On one hand we agreed to the new programme. We have a voluntary contribution by private creditors and we also said at the same time that we need other instruments to avoid the threat of further contagion, in order to ensure the overall stability of the euro.”

She also tried to assuage the worries of German taxpayers over payments to more profligate eurozone countries: “What we spend today we will receive back many times over.”

The chancellor, who has faced repeated criticism for not showing more decisive leadership during Europe’s debt crisis, said the global financial markets were receiving “the right message at the right time.”

Germany wanted to help stabilize Greece and improve the country’s competitiveness, she said.

“We will stand at Greece’s side,” Merkel said.

She also said it was crucial that the European Central Bank, which had warned about the impact of a Greek default, had supported the latest rescue package.