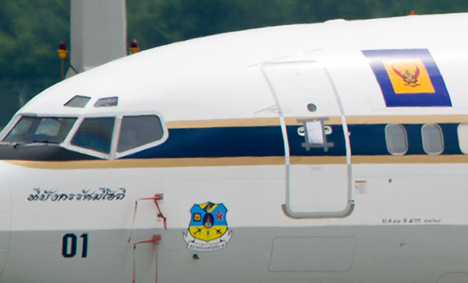 The decision not to fork out the €20 million ($28 million) ordered by a German court in exchange for Maha Vajiralongkorn’s Boeing 737 adds a further twist to an uncomfortable episode that has threatened ties between the nations.

“We are confident that the aircraft belongs to the crown prince. He is not involved with this case and the documents are very solid, so there is no need to pay the guarantee of €20 million,” said Thai Foreign Minister Kasit Piromya.

The aircraft was seized at Munich airport on June 12 in a long-running dispute with the receivers of an insolvent German construction firm who say they are owed almost €40 million ($57 million).

But on Wednesday a court in nearby Landshut said it had received an assurance under oath from the Thai Department of Civil Aviation’s director that the plane belonged to the prince, not the Thai state, as well as a 2007 registration certificate.

The deputy chief justice of the court, Christoph Fellner, said however that since these documents provided only a “presumption of ownership,” a bank guarantee had to be paid.

Kasit, speaking to reporters after returning from Germany, said the court was in possession of documents submitted by the Thai government and would make a final ruling on ownership in August.

“The plane will be parked in the German airport until the case is resolved,” he said.

The court said it set the guarantee to reflect the estimated value of the plane, which the prince is said to often pilot himself.

Kasit flew to Berlin following the seizure of the aircraft, calling the incident a “huge mistake” and meeting a senior German foreign ministry official to press for the plane’s release.

The German government had stressed that it was a matter for the courts.

The spat goes back more than 20 years to the involvement of Germany’s DYWIDAG, which merged with construction firm Walter Bau in 2001, in building a motorway link between Bangkok and Don Muang airport.

After “numerous breaches of contract by the Thai government,” Walter Bau,

by then insolvent, in 2007 claimed for damages.