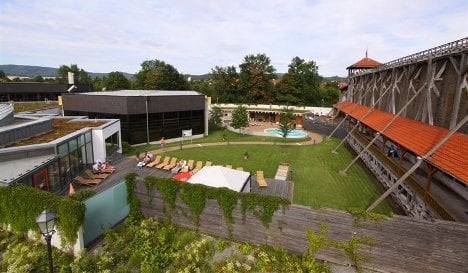 The WerratalTherme spa was completely rebuilt a few years ago. Now, the large, light-filled complex offers an array of health and wellness activities, including seven different saunas, a garden, an area for strolling along a two-hundred-year old salt works, and a giant indoor/outdoor salt water swimming pool.

During the summer, the extensive sauna program begins daily at ten in the morning with a “musical infusion” in the so-called “mental sauna,” which has a panorama window looking out over the sauna garden (and which was designed to relax your mind). The “kelo” sauna, built from untreated polar pine wood, calms with its natural wood scent, while the cooler “sanarium,” lit by a rose-quartz lamp, is designed for visitors who prefer lower temperatures. Honey and salt rubs take place several times a day in the steam sauna, where the mist is so thick you can hardly see your neighbours. Every hour on the hour throughout the day, super-hot infusions in the Finnish sauna bring temperatures up to 90 degrees Celsius. Afterwards, you can jump into the freezing cold pool right outside, in full view of the magnificent old salt works.

While the saunas are lovely, it’s the mineral-rich salt pools that really set the WerratalTherme apart – and give the experience a dash of history, too. The largest pool, which is nearly 600 square metres (6,500 square feet) in size, begins indoors. Underwater, music plays, and a canal lets you drift through to the outdoor pool, where you’ll find massage nozzles and a rounded recess where the water moves in a quick-flowing circle. In a smaller salt pool, the spa holds aqua-cycling classes and water aerobics. And for those who are brand new to living in a non-water-based environment, each week a local midwife gives babies three months and older their first swim lessons. There’s also a separate wave pool (who needs the beach?).

Where does all this salt come from? Not the ocean, that’s for sure. The WerratalTherme is located in Bad Sooden Allendorf, a largely intact medieval village near the border with Thuringia whose fortunes were built on salt. The Roman historian Tacitus recorded the existence of saline springs near a river here; the Goths battled over the salt wells. By the time the modern village was founded, some 800 years ago, the extraction of ‘white gold’ from the earth was the area’s main economic factor.

Today, salt isn’t such big business anymore. But, thanks to its healing properties – salt water is said to improve circulation, in addition to leading to a general feeling of well-being –it’s still one of the town’s draws. Starting in the late 1800’s, the town became a spa destination, as people came for the baths, and to walk along the salt works, a high wall composed of blackthorn twigs that the groundwater is pumped through, concentrating the salt. Inhaling the saline air is also supposed to be good for the lungs. (If you’re curious, there’s also a Salt Museum in the village).

“Salt water is always good for health,” said Petra Hüth, who runs the WerratalTherme. But so are apparently chocolate massages, Aryuveda sessions, and mud treatments. The summer special is pretty healthy, too: Through the beginning of August, you can buy a day pass for both the salt pools and saunas for €12.50.

The WerratalTherme is open until 10:30 pm every night but Friday, when it stays open until midnight. The first Saturday of every month is “Long night of the sauna,” when the saunas stay open until 2 am, and are nude-only after 10 pm.