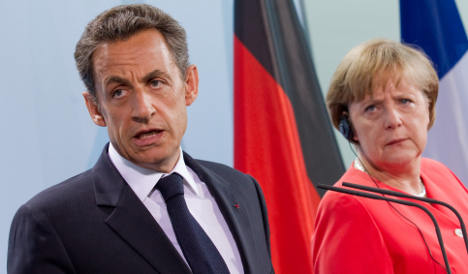 The decision for Merkel and Sarkozy to meet was taken during a telephone conversation on Tuesday evening, it was reported, after Merkel had publicly talked down the chances that the eurozone summit would deliver the silver bullet to resolve the debt crisis.

The International Monetary Fund has been pressing leaders to take urgent action while markets are increasingly worried that Athens could default on its €350 billion debt and spark a chain reaction across Europe’s weakest economies.

While senior eurozone finance officials met in Brussels to craft a second Greek bailout for Thursday’s summit, Merkel warned against more far-reaching proposals that have been invoked to master the euro’s year-long crisis.

“If you want to act responsibly, you know that such a spectacular step will not happen, including on Thursday,” Merkel told a news conference after talks in Hannover with Russian President Dmitry Medvedev.

The German leader voiced concerns about ideas such as restructuring Greece’s debt, creating joint euro-area bonds or forming a transfer union – a step towards a federal Europe.

Merkel also said governments needed to reduce their debt and improve competitiveness. “Thursday will help in this but further steps will be needed, not one spectacular event solving all problems.”

She also spoke by phone with US President Barack Obama, and the White House said the two agreed that “dealing effectively with this crisis is important for sustaining the economic recovery in Europe as well as for the global economy.”

After several turbulent days for the euro and European stock markets, the eurozone is racing to agree on a new Greek rescue and prevent the crisis from dragging down bigger nations, with Italy and Spain next in the firing line.

The International Monetary Fund (IMF) called for urgent action, warning even Europe’s strong economies, like Germany and France, were at danger from contagion from a meltdown in struggling Greece, Ireland, Portugal, Italy and Spain.

“Delays in resolving the crisis could be costly for the euro area and the global economy,” the IMF said in a detailed report on “spillover” risks for the eurozone.

Senior eurozone government officials were to meet again on Wednesday in the hope of reaching a deal by Thursday, a year after Greece received a bailout of €110 billion from the European Union and IMF.

Germany, the eurozone’s paymaster, Finland and the Netherlands have been at odds with the European Central Bank and other governments over their insistence that private bond holders share the pain in the new rescue package for Greece.

Late on Monday, a special tax on eurozone banks emerged as a potential compromise after governments had struggled for weeks to agree on involving the private sector in the second bailout without triggering a devastating default.

The French and German banking federations voiced concerns about the idea.

They said “a discount of 50 percent” on existing Greek state bonds would be desirable, and could reduce Greek debt from some 160 percent of GDP to 106 percent, in an opinion piece to appear in Wednesday’s Frankfurter Allgemeine Zeitung.

They added said that whatever it took, Greece’s debt burden had to be reduced, otherwise it would become an increasing burden on its stronger Eurozone peers.

EU officials have also mooted a convoluted plan to lend Greece money with which it can buy back its own debt at a reduced price on secondary bond markets, effectively postponing its repayments to give it breathing space.

Jean-Louis Mourier, economist at brokerage firm Aurel BGC, said the markets were “not expecting a miracle solution” but wanted eurozone leaders to at the very least agree on a new plan for Greece.

ECB president Jean-Claude Trichet reiterated his opposition to any deal that would amount to a default, repeating warnings that this would prompt the central bank to cease financing the Greek banking sector.

“We ask the eurozone governments to find appropriate solutions as soon as possible,” he told the Slovak daily Hospodarske Noviny. But an ECB governor, Ewald Nowotny, broke ranks, telling CNBC television that proposals that would trigger a “short-lived selective default” should be studied because it “would not really have major negative consequences.”

Merkel has made clear she wants a deal on the table by Thursday after she forced EU president Herman Van Rompuy to cancel plans for a meeting last Friday following a raucous week in the markets.