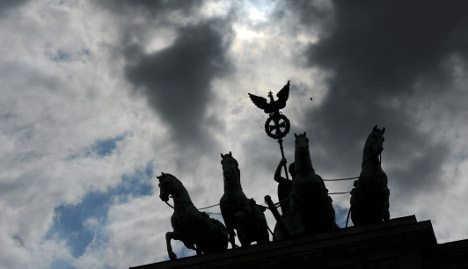 It was just a moment, the time it takes to gulp a double espresso, but long enough to persuade me that I had to leave Berlin and reclaim an interrupted life.

Too lazy to shop for food, I was having breakfast in the Kempinski Hotel. Two Yanks were eating Eggs Benedict at a window table and, as usual, I strained to listen in. They were evidently business men considering investing in Berlin.

“Prices are low,” said one of the men, thin-faced but with a slight stomach that pushed against the table. I deduced he was talking about property here.

“But so are profits,” said his colleague, “Forget-it – the German rental laws are a nightmare. Leave Berlin alone.”

Leave Berlin alone! At the neighbouring table, I let out a silent cheer, a muffled “Bravo!” Who wants foreigners buying up our city? Imposing their alien rules and expectations on us? By all means, visit Berlin, spend your money here, and certainly feel free to admire the city. But then, for the love of God – go home.

For me, this was the point of no return. Suddenly I realised that I had mutated into a Berlin micro-chauvinist, a near-native of this provincial Prussian metropolis that is so determined to resist all that is foreign and strange. After 20 years, I had become a victim of the Berlin version of the Stockholm Syndrome. I had slept with the enemy. It was time to go.

Many English people say they love Berlin, of course. The fatuous lifestyle magazine “Monocle” has just declared it to be the eighth “most liveable” city in the world, after Helsinki (number one) and Munich (number four) but satisfyingly ahead of Tokyo and Madrid. The judges liked the public transportation network – presumably they did not investigate the city’s S-Bahn commuter trains last winter – and its value for money, its greenery, its bicycle paths. That’s nice.

Mismanaged and in denial

There is a big difference between Berlin and the other winners though: places like Melbourne and Zurich are not just easy to live in but are embracing change. They give a sense that new ideas can be realised, that money can be made and that foreigners are not just something to be tolerated but celebrated as part of the adventure of urban life. That spirit, which I found as a student in West Berlin in the 1970s, has evaporated.

But the truth, my truth, is this: Berlin, so badly managed for so long, has betrayed us all, those of us who thought we could fall in love with the place. Some older Berliners tell me that the place has become harsher, more self-regarding over the past decade. I don’t think that’s quite right either. It’s not about the tone of the city, however raw, but about its withdrawal from the realities of modern Europe, its deliberate inability to deal with or even address the issues of an accelerating world.

Under a string of mediocre politicians above all under Mayor Klaus Wowereit, Berlin has allowed itself to become as second-rate capital. I am sorry that it has to be a foreigner to say this, a foreigner moreover with packed suitcases but who else will say it? Not the mayor. He is fond of saying Berlin has “a special attraction – the number of tourists prove that.”

But Disney World in Orlando also has lots of tourists; it is attractive to certain groups of people (most of them under the age of nine) and only for three days at a time. Tourists are no measure of international flair. Or a mark of a city’s authority.

As for Berlin’s problems, says Wowereit, it is up to the federal government to pay more. That doesn’t sound like a politician with a vision. Actually it sounds almost identical to what Wowereit was saying five years ago. And my heart sinks as yet another Berlin politician abdicates responsibility.

From cutting edge to standing still

There was a time when Berlin was at the cutting edge of Europe. The city has always had problems, not always of its own making, but it has never tackled them by standing still. Nowadays, the quicker the world moves, the more immobile Berlin seems to become.

It has become cool to the outside world because of its big empty spaces – space for clubs and galleries and re-invention. Provincial kids, not just from the villages of Baden-Württemberg, are in the city’s thrall because they can take drugs and stay out late without anyone reporting them to their parents. But the clubs and galleries are going bust. They lack high-spending backers, anyone willing to make an investment longer than nine months.

And the few internet start-up companies the city’s boosters like to tout are likely to become close-down companies as funds dry up. Markets shrivel and banks lose confidence.

It would be cheap and silly to blame Berlin’s clinical narcolepsy, its sleeping sickness, on the political class alone. We all know the deep cultural rot of this stasis.

The city that has been stuffed full of subsidies, like a wrestler on steroids, is of course going to find it difficult to move or think straight, is going to confuse size with strength. And of course its political class is going to be more adept at spending state money than saving it, more likely to cater to its clients than puzzle out what is best for the city. And we all let that happen.

Over the years I haven’t made myself very popular in Berlin and no doubt this article won’t improve my chances of becoming an honorary citizen. But you don’t become popular by trying to wake someone up in the morning. I will cherish Berlin with all its weaknesses and follies, its big sentimental heart, its vanity and its caustic humour. Yes, maybe I even love the place and its people.

But it’s time to say goodbye – and not with a kiss.