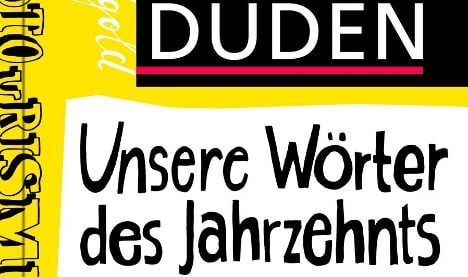 Some are pure German, such as Hüftgold which translates as hip gold, but is a slangy way of saying fat stored on the hips – and is often used to describe fattening foods.

Another eating-related new word is Gammelfleisch – rotting or unclean meat. One which may end up migrating into English dictionaries is Fremdschämen, surely a relative of schadenfreude, meaning to be ashamed on the behalf of someone else.

There is also Dudelfunk, a radio station which only plays German folk music, and Dosenpfand, the deposit levied on drink cans. A nice innovation is Brötchentaste, the button on a parking meter which gives a few minutes free parking – to pick up daily bread.

Others are fairly easy to decode, such as Heuschreckenkapitalismus – locust capitalism, a term coined by Social Democrat politician Franz Müntefering to describe the rabid capitalism practiced by some corporations.

Schlüssellochchirurgie can be literally translated, one element at a time to become key hole surgery, while Handyfrei is obviously a mobile phone-free zone. Hassprediger is a hate preacher, while Fettabsaugung, literally ‘fat sucking’ is liposuction. Another which raises a smirk is Buschfunk literally bush radio, for the distribution of information via informal channels – the jungle telegraph.

But many of the new German words have, depressingly for language enthusiasts, simply been adopted from English and other languages. New German words such as Buzzer, Hoax, Googeln, Get-together, Electronic Book, Drop-down Menü and Gangsta-rap need no translation.

The first Duden dictionary was published in 1880, by Konrad Duden. Since then, the company has in some ways become the curator of the recognised German language. This latest collection of new words accepted into the dictionaries between 2000 and 2010, has been released this month to mark the centenary of Duden’s death on August 1, 1911.