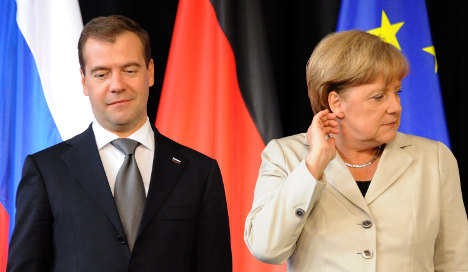 Merkel held an annual joint cabinet meeting with President Dmitry Medvedev Tuesday with energy high on the agenda in the wake of decision of Germany, the top importer of Russian gas, to phase out nuclear power by 2022.

But despite insistence from both sides that it would not mar the get-together, an embarrassing back-and-forth over a prize from a private German foundation that was to have gone to Putin drew a furious response from Medvedev.

“When you have already taken a decision to award a prize, it is taken and reversing that shows cowardice and inconsistency,” he told reporters in the northern city of Hannover.

“I think after such a decision, this prize is finished, at least for the international community,” added Medvedev, who declined to be drawn on whether he would stand for re-election in March or clear the way for a Putin comeback.

Organisers announced at the weekend that they would rescind their invitation to Putin to accept the Quadriga prize for democratic “role models” after a storm of protest in Berlin over his disputed record on human rights, media freedom and the Chechnya conflict.

Merkel and Medvedev’s annual huddle included most ministers from the two countries, whose trade relations have intensified dramatically in recent years even as Germany has criticised rights abuses in Russia.

But Merkel sought to tamp down expectations of a dramatic rise in German gas imports from Russia as it scraps nuclear power over the next decade.

She said that Germany would develop its coal-fired plants, energy efficiency and renewable power sources as it closed its reactors by 2022 so that its gas needs would stay within a “reasonable range.”

“I just want to say that I think that perhaps this idea that the sky is the limit when it comes to our gas imports is a little exaggerated,” she said. “This is not meant to be an anti-Gazprom speech,” she added, referring to the Russian state-owned energy giant.

“But I just wanted to say that our targets are not completely out of this world. They lie in a reasonable range that can surely be met by Gazprom.”

Russian Deputy Prime Minister Viktor Zubkov said with a smile that if gas exports to Germany rose by 30-35 percent in the coming years “that would not be bad.” Merkel retorted: “We’ll see, we’ll see.”

She later said at the news conference with Medvedev that price would be decisive in whether Germany turned to Russia for more gas or to other partners such as Norway and Britain.

Russia also aims to boost deliveries of gas to Germany through the Nord Stream pipeline being built under the Baltic Sea and due to come online in October.

Russian exports to Germany reached €31.8 billion ($45 billion) last year, of which gas and oil accounted for about 70 percent, with €26.4 billion in goods going the other way.

On a key point of contention between the countries – freedom of travel – Merkel acknowledged that Germany had been the “brake” on liberalisation of visa rules between Russia and the European Union.

“We discussed this issue with President Medvedev and agreed we must develop a step-by-step plan,” she said, adding that this could include exceptions for hospital workers and gradual easing of restrictions for students and tourists.

“I think if Germany begins to be a bit more open then Europe will follow suit.”