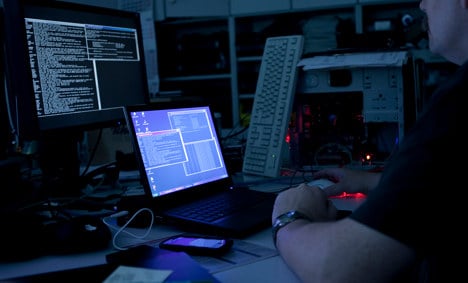 The 23-year-old German is suspected of having obtained and manipulated sensitive data, according to Cologne’s public prosecution office.

Investigators confiscated evidence from the man’s apartment for analysis by investigators and he was due to be brought before a magistrate on Monday.

At least one of the customs service’s computers has been penetrated, disrupting a police spy programme that is supposed to keep tabs on suspected terrorists and major criminals.

The intrusion was apparently undertaken with the help of spyware or Trojan programmes that went unnoticed for many months, while the investigation has been particularly difficult because many of the attacks were routed through Russian computers.

But as the official investigation into the hacking gathered strength, on Monday the group calling itself the “No Name Crew”, which has claimed responsibility for the hacking, threatened further attacks if the investigation didn’t immediately stop.

It posted an extract of data from what appeared to be a classified police “communications plan” from Koblenz. This was marked secret, and contained phone numbers and email addresses of a selection of various state offices. A spokesman for the federal police played down its importance on Monday, saying the plan was outdated and had been widely circulated.

The group has a count-down on its webpage, leading to July 28, when it says it will post data it grabbed during the hack of another, until now unidentified ‘federal computer’.

The hackers have said they had ‘sniffed’ at all network traffic between the federal criminal police, the customs and other federal police, and boast they have seen, “mails, notices, confidential data and every dirty detail.”

The government has put together a ten-person task force to figure out what went wrong and come up with recommendations to thwart future attacks. Other media reports blame the use of cheap software to try to protect the computer systems, which were thus easy for the hackers to break into.

In addition to the customs attack, the “No Name Crew” has taken responsibility for targeting right-wingers online, including the extreme-right National Democratic Party (NPD).

But they’ve also faced the anger of vigilante citizens trying to snuff them out. Vigilante “cyber-cops” posted a 19-year-old’s name and photo online, claiming he was a part of the group.

But he denied that charge to the news media and police have shown little interest in him.