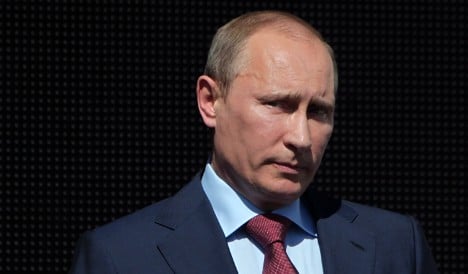 “I regret it deeply,” he said, while adding: “I do not think that it will harm our relations.”

The private foundation that awards the Quadriga prize each October 3, the anniversary of German reunification, to “role models for enlightenment, dedication and the public good” had earlier this month selected Putin as this year’s winner.

The announcement sparked outrage across the political spectrum over Putin’s disputed record on human rights, journalistic freedom and the Chechnya conflict.

Others noted the award could seem to be an endorsement of Putin for March’s presidential election. He has not yet announced whether he will stand.

On Saturday, the organisers bowed to what they called “unbearable” pressure, including a threat by the 2009 laureate, former Czech president Vaclav Havel, to return the prize, and called off this year’s ceremony.

Grinin said Moscow wanted to continue the bilateral dialogue on the rule of law that is part of the “modernisation partnership between Russia and Germany” and is on the agenda for the talks Tuesday in Hannover.

Asked whether Merkel saw the jury’s U-turn as an “affront” that would cast a shadow over the get-together, her spokesman Steffen Seibert said it would not.

“The chancellor is going into the meeting tomorrow morning confident that it will lead to several specific projects that underline the strong partnership between the two countries,” he said.

In Moscow, Putin spokesman Dmitry Peskov played down the affair Saturday, insisting it would not affect relations between the two countries and that the government would “treat with respect any decision by this organisation.”

German Foreign Minister Guido Westerwelle stressed the importance of good relations with Russia, warning that ties should not be damaged for “frivolous reasons.”

“Yes, we have differences of opinion, we would like to see progress on this front,” he told reporters in Brussels.

“But at the end of the day the German-Russian relationship is of strategic importance and they should not be damaged because of some rashness or other.”