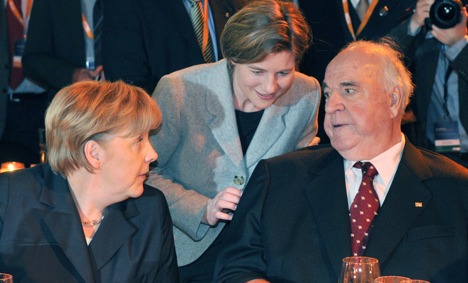 News magazine Der Spiegel reported Sunday that Kohl told a recent visitor to his home, “She’s ruining my Europe” – referring Merkel’s handling of the ongoing euro crisis, and to his own part in developing the European Union and laying the foundation for the single currency.

Other prominent members of Merkel’s Christian Democratic Union (CDU) have also criticized their leader. Volker Bouffier, state premier of Hesse and CDU deputy leader, recently said the chancellor was in danger of destroying her party’s pro-European heritage. “Europe is a political project. It’s too important to leave to the ratings agencies,” he told Der Spiegel.

“The last thing that an export country like Germany can afford is a euro-sceptic population,” added Kurt Lauk, the head of the CDU’s economic council. “The government must go on the offensive now.”

Merkel is fast gaining a euro-sceptic reputation because she is seen as blocking a solution to the debt crisis. She recently threatened not to attend a summit of government leaders, planned for Thursday, unless a second aid package for Greece would be agreed there.

Merkel is currently under attack from all directions. The head of the German Bundesbank Jens Weidmann told Die Zeit newspaper last week that the government lacked a clear strategy for dealing with the snowballing debt crisis in the eurozone.

Merkel was accused of “euro-populism” earlier this year, when she criticized the pension and work conditions in Mediterranean countries, and implied the populations there did not do enough work.