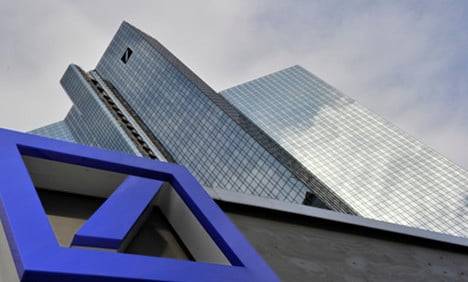 The lawsuit, filed in a New York court, accuses the German banking giant of fraud and making “false and misleading statements” when it sold Dexia the securities, Dexia said in a statement.

Deutsche Bank bundled thousands of poorly documented subprime mortgages into products called residential mortgage-backed securities (RMBS) that it sold to Dexia while privately betting against them, the lawsuit said.

“Deutsche Bank originated, purchased, financed and securitized exceptionally high-risk loans into these RMBS, all while internally disparaging the poor quality of these loans and the RMBS they backed as ‘pigs’ and ‘crap,'” it said.

While touting the securities’ top-notch AAA rating, Deutsche Bank took out a $10-billion short position against the US housing market which became profitable as those RMBS plunged in value, the lawsuit said.

A spokesperson for Deutsche Bank said that the lawsuit was unjustified and that the bank would use “all legal means at its disposal” to fight back.

Dexia was hit hard by the financial crisis. It received a €6.4-billion ($9.0 billion) bailout from the governments of Belgium, France and Luxembourg in 2008 after suffering steep losses from the downturn in the US housing market.

Before its lawsuit against Deutsche Bank, Dexia filed a similar lawsuit against subprime-mortgage lender Countrywide Financial and Bank of America over its losses from mortgage-backed securities.

Bank of America, which acquired Countrywide before the crisis in early 2008, recently proposed an $8.5-billion settlement with holders of distressed mortgage-backed securities originated by Countrywide.

Dexia said on Thursday that the proposed settlement did not apply to its lawsuit against Bank of America because it did not cover claims for fraud.