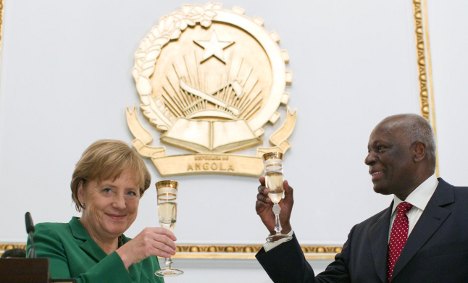 Merkel was expected to discuss energy and African security matters with President Goodluck Jonathan, who won April elections viewed as the fairest since the continent’s largest oil producer returned to civilian rule in 1999.

The German chancellor was welcomed by a military guard at the presidential palace in Abuja on Thursday morning following her arrival in Africa’s most populous nation the previous night.

Security was tight, with Nigeria hit by almost daily bomb attacks and shootings in recent weeks, mostly in the north of the country, blamed on an Islamist sect.

After her talks with Jonathan, Merkel will open a Nigerian-German business forum, then meet with the head of the 15-nation Economic Community of West African States, based in Abuja. She is expected to leave Thursday afternoon. Nigeria is one of the world’s largest oil exporters, with some three percent of its crude exports going to Germany.

It is also home to vast gas reserves – considered the world’s eighth largest – but the resource remains largely untapped, mainly due to a lack of infrastructure. The country plans to greatly boost gas production over the coming years.

Nigeria intends to privatise electricity production and distribution in a bid to solve its power woes, with outages occurring daily despite the country’s oil-and-gas wealth, opening opportunities for potential investors.

Merkel faced criticism by her political opponents at home after her Wednesday visit to Angola, another major oil-producing country, over the possible sale of six to eight patrol vessels to Luanda.

Critics said such a deal would be inappropriate considering Angola’s human rights record. Germany’s ARD public television says the deal for up to eight patrol boats is worth between €10 million to €25 million.

According to a German government transcript of her remarks in Angola, Merkel said she did not believe such a deal would constitute “a build-up in armament in the broad sense of the term.”

“It’s more a case of providing border patrol boats for which we wanted to sign a memorandum of understanding. But this will take a little while longer,” she said.

“Overall it’s about toughening up Africa so it can take on by itself peace missions under UN mandate. That’s in Europe’s interest.”

The patrol boat flap comes amid a heated debate in Germany surrounding the reported decision by Merkel’s centre-right coalition to sell Saudi Arabia hundreds of Leopard 2 tanks, even though the country recently helped put down an uprising in neighbouring Bahrain this spring.