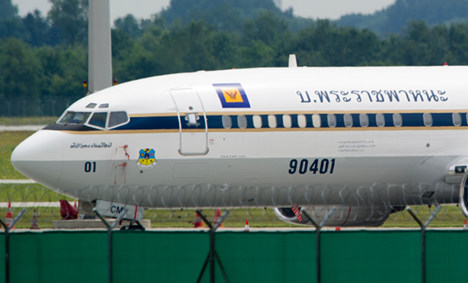 The plane was seized Tuesday as part of a long-running dispute in which Werner Schneider, the insolvency administrator for the Walter Bau construction group, is demanding more than €30 million from the Thai government.

The Walter Bau group went under in 2005 and was later partly acquired by an Austrian company.

“We in the insolvency of Walter Bau AG have been trying for many years to enforce a legitimate demand of more than €30 million and this drastic measure is virtually the last resort,” Schneider said, explaining that courts have found the move to be legal.

The dispute stretches back more than 20 years, to when the German construction firm Dywidag helped build a 26-kilometre road between Bangkok and the airport for which payment was allegedly never received. Dywidag merged with Walter Bau in 2001.

The Thai government has repeatedly refused to respond to the claim and attempts by the German government to recover the funds were unsuccessful, Schneider said.

The exact value of the seized jet is unclear. But Boeing’s list prices for various 737 models range from €40 million to €61 million. It is owned by Thailand’s airforce but is used by the revered Crown Prince Maha Vajiralongkorn – and sometimes flown by the prince himself.

A spokesman for Munich’s airport would not comment on the situation, other than to say that officials will accommodate the aircraft if it needs to remain for a while.

This was not the first time something like this had happened, he added.