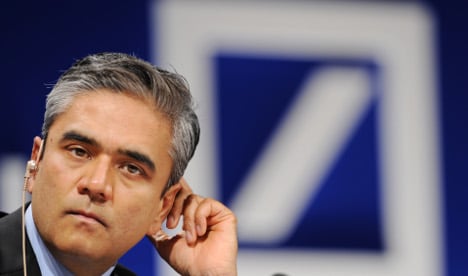 This followed a meeting on Sunday of members of the bank’s supervisory board who decided to recommend that Jain, along with Jürgen Fitschen, currently head of the bank’s German operations, take over from current chief executive Josef Ackermann in 2013.

The decision will quickly be put to the whole supervisory board, the paper said, while warning that the two candidates were not yet assured of a majority vote.

The main problem resides in the fact that Fitschen, at age 63, is considered close to retirement, and that his appointment would in effect leave Jain in charge.

Jain, who has spent much of his career in London, does not speak German. He has been responsible for running Deutsche Bank’s most profitable division.

a stake in the Mumbai Indians, the all-star Indian Premier League cricket team

owned by the super-rich Mukesh Ambani.

Armed with a degree from Delhi University and an MBA in finance from University of Massachusetts Amherst, Jain first cut his teeth at Merrill Lynch in New York before moving to his present employer in London in 1995.

And despite running a division that earned its crust using the kind of opaque investment bets that brought the global financial system close to collapse in 2008, Jain is generally seen as having had a “good” crisis.

He is credited with having managed rapidly to re-organise his division post-crisis and get it back to making money. In the first quarter of 2010, it generated €2.7 billion ($3.3 billion) in pre-tax profits.

Since 2002 he has been on the bank’s executive committee and since April 2009 a member of the management board, earning an estimated €9.7 million last year, 200,000 euros more than the man he might succeed, Josef Ackermann.

Swiss-born Ackermann is believed to have wanted former German central banker Axel Weber to succeed him, but Weber has instead decided to head the Swiss rival bank UBS.